5 Reasons Why Katy Perry Must be Stopped

It was a big weekend for the world's most famous reanimated styrofoam wig stand, otherwise known as Katy Perry, as she's snapped leaving dinner with John Mayer in Hollywood. The two kept their hands together while being photographed, so this dinner date with the paps must mean they've reached some horrible new relationship level/publicity agreement.

It's also been announced that Men's Health Magazine has named her the sexiest woman of the past year. While, yes, obviously that's an "honour" of dubious distinction, it's just another sign that the Katheryn Elizabeth Hudson entertainment juggernaut is nowhere near over. So, today is as good a time as any to say "enough is enough" and admit that I f-cking hate this talentless hack - and you should too. Here's why....

This one is nothing new but the longer she goes without having to apologize the more it makes my blood boil. The story is that on her first album, well her first as "Katy Perry", there's a song called Ur So Gay, about her super fem boyfriend who "acts gay" but is straight. It’s 3:45 of stereotypes and pre-women's lib gender normative bullsh-t. She's addressed the backlash with a "I understand that you were offended" type of non-apology but has never actually said "Holy sh-t. My bad. That was so disgusting". So that was in 2008, and now all these years later she's accepting awards from The Trevor Project and passing herself off as a gay activist. Girl? Ur So Embarrassing.

We pretty much all knew Katy wasn't exactly a Women's Studies major when we first heard I Kissed a Girl, right? Still, it was shocking to hear her say last month, at a Women in Music event no less, that she is "not a feminist but believes in the strength of women". What. The. F-ck? This is like saying "I'm definitely not against dog fights but I believe my puppy is SO cute!" What ARE you if not a feminist!? This is a statement lacking in any logic and so clearly ignorant that you have to believe maybe she thought the question was about...being an alchemist? Sierra mist? Feminine fisting?

Take a second and scroll down to the picture of Katy at the 2011 VMAs...yes, the one where she's wearing a block on her head. Remember that? Look into her eyes. Do you see it? The total absence of meaning? The empty expression that communicates simply...nothing? This is the essence of Katy's failure as a performer - she creates the illusion of avant-garde when all she's really giving you is an expensive spectacle. She has no identity, no character, and exists simply to fill the void Britney left when she checked out for good in 2008 (personally, not musically). 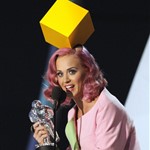 Teenage Dream. Firework. WIDE AWAKE! These are some seriously perfect pop hits that have transcended demographics. Gays, hipsters, your mom, everyone can jam to this sh-t! But imagine if a singer you actually loved got to perform these? Imagine if Christina got her hands on Firework? If Kylie had recorded E.T.? Every time Katy Perry is good, it's an opportunity missed for someone talented to be great.

Love the troops. Hate this commercial.