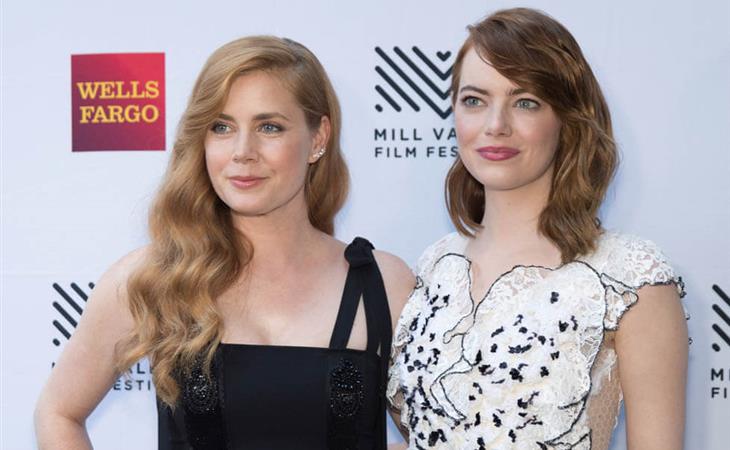 After the Venice Film Festival and TIFF, Emma Stone emerged as the current frontrunner for Oscar Best Actress for her work in La La Land. Amy Adams also generated some buzz for her performances in Nocturnal Animals and Arrival. We’re still four months away but we’re well into award season now and both Emma and Amy were together last night at the Mill Valley Film Festival. Given the momentum she’s had so far, Emma will likely be hitting every stop she can. And Amy too. Look at them, side by side. Even their hair is styled similarly, with one side pinned back.

They’re saying it could be quite a competitive year for lead actresses. Natalie Portman is going to push for Jackie. A lot of people believe in Ruth Negga in Loving. Annette Bening is always amazing and her film 20th Century Women is screening at the New York Film Festival this weekend. Hidden Figures isn’t opening until December and Taraji P Henson could become a factor. Meryl Streep is always a factor. And, of course, Viola Davis in Fences, although some are speculating that Viola might have a better chance if the studio submits her in the Supporting Actress category. So I can’t wait to see all of them on the circuit as we get closer and closer. None of them will be telling us how they lived in a bear for 6 months in the wilderness.