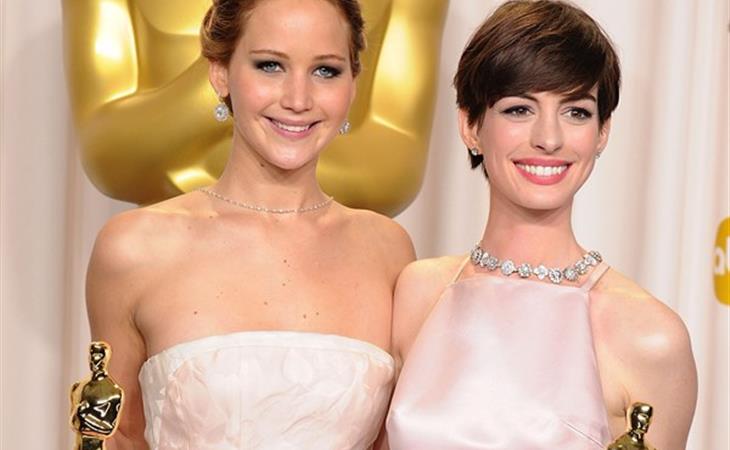 Leo’s reaction to Lady Gaga’s arm bump is now the 5th most viewed Vine ever. People love it, can’t get enough of it. It has spurred ridiculous stories of feuds and after-party confrontations (which high level gossips such as yourselves know are BS).

Even though some (AHEM, Lainey) want to cast Leo as the evil Prom King, there was a moment with another big winner that passed quickly, save for trade media and Twitter. Jennifer Lawrence telling a reporter to get off his phone, did you see it?

First off, here’s the video:

My first time watching it, I cringed for the guy. Even though you can’t see him, it’s clear that English is not his first language. Both my parents have strong accents, so perhaps I’m more sensitive to this, but I HATE when people make fun of others for not speaking flawless English. After a few more viewings, I think that it’s not that she made fun of his accent -- people imitate accents all the time, and it’s not automatically derogatory -- but she made fun of the way he spoke, his cadence. That’s what made it so uncomfortable, the scolding and derision disguised as teasing. She knew he was struggling and used it to embarrass him. Still, one could argue she was legitimately trying to be funny and her joke didn’t work (maybe she was having an off night, because her bit with Amy Schumer didn’t really work either).

And Leo’s eyebrows saved her from any real kind scrutiny. Until Anne Hathway decided to take to Facebook like an aunt scandalized by the war on Christmas.

Dear the Internet,
It's become pretty clear that the Jennifer Lawrence "scolding" was taken out of context and that she was dryly joking with a journalist who was indeed using his phone to take photos of her.

Let's not continue the sad but common practice of building people - especially women- up just to viciously tear them down when we perceive them to have misstepped. Jennifer is a beautiful, talented, wildly successful, popular, FOUR TIME OSCAR NOMINATED young woman. Please let us not punish her for these things.

Why Anne Hathaway, why? Why shine a light on this story and give it legs? Why take it upon yourself to defend Jennifer and bring up all sorts of asshole issues? Why insert yourself into a dwindling “controversy” that has nothing do with you?

Is this feminist solidarity? Is it Anne Hathaway speaking up for someone the way she wanted to speak up for herself when she was campaigning in the midst of Hathahate? Is it just run of the mill attention seeking actor behavior?

Per Anne’s post, Jennifer was “dryly” joking with a reporter because he was –gasp!- using his phone to take photos of her. Um, it’s the pressroom, at an awards show, where she had just won an award. Is there a more appropriate/sanctioned/fair place to take a photo of celebrity than a televised event’s pressroom? This is exactly what should and does happen. It is entirely the point of a pressroom –to give the press access to the winners. He was, without a doubt, trying to do his job. In 2016, phones are an integral part of most of our jobs, journalist or not.

Then Anne talks about the practice of building people up just to tear them down, a favourite plotline of celebrities. Oftentimes, when faced with criticism, a celebrity will pull out the “jealous” card or the “build you up to tear you down” card. But Jennifer is hardly in a position to be chewed up and spit out by the public, the media, studios or her peers. She’s a juggernaut. A rich, blonde, beloved juggernaut that can get asses in seats.

Which brings me to Anne’s closing, that Jennifer is sunshine and rainbows and a “FOUR TIME OSCAR NOMINATED” (caps all hers) actress, which makes her a target for a bunch of meanies.

Being a FOUR TIME OSCAR NOMINATED actress does not make her impervious to f-cking up. Being a FOUR TIME OSCAR NOMINATED actress puts Jennifer in an immense position of power, a position she has used to lobby for wage equality. A position she used to make fun of a reporter in a pressroom. As Lainey said last week about Tom Hardy, “it’s that power imbalance that creates situations where reporters feel like second class citizens.” There is no doubt that standing up there, commanding a room (as she is completely empowered and expected to do), holding an award, Jennifer had total control over this reporter.

In a town that is so acutely aware of status, everyone knows she is top dog. For the most part, she’s really, really good at it. Like Clooney-level good. She can put reporters at ease with engaging, funny, irreverent interviews. This Golden Globes moment was a slip, an anomaly in the JLaw façade. It was turning into a faint memory.

Anne’s unprompted defense, with its plea for #love and ingrained entitlement, is clouding Jennifer’s moment. It’s creating momentum – and debate – for a story that was just about to die. Jennifer has not said anything about the incident with the reporter – no cheeky quip or open letter to a fansite. She smartly ignored it, but now Anne’s post has made that harder to do.

Leo’s eyebrows thank you, Anne. But I don’t think Jen’s publicist will be sending you flowers. 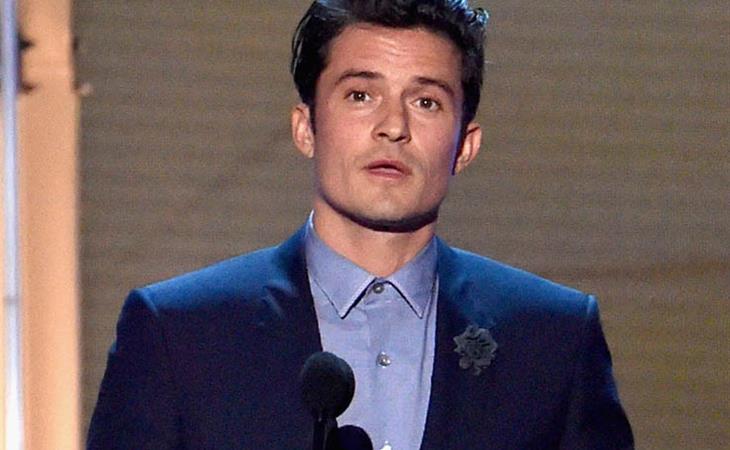