Two years ago, Carey Mulligan was rebounding off Shia LaBeouf (it makes even more sense now, doesn’t it?) by hanging out with Tom Sturridge and living out of a Best Western. It was never confirmed if they were dating but it didn’t last long enough for any interest to really take hold anyway because a couple of months later she was photographed holding hands in New York with Eddie Redmayne.

Here’s one shot and the rest I’ve re-posted below, from January 2011: 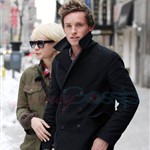 Shortly after that, she and Marcus Mumford started dating. And now they’re married. They will celebrate their first anniversary this month.

Carey and Eddie were both at the BAFTA event where the Queen was honoured and greeted each other warmly. Cute, right?

This makes me very happy. Because I take it to mean that with Carey there’s very little drama or resentment and people love her. And I love her. SO much.

The Royal Bond Girl is honoured