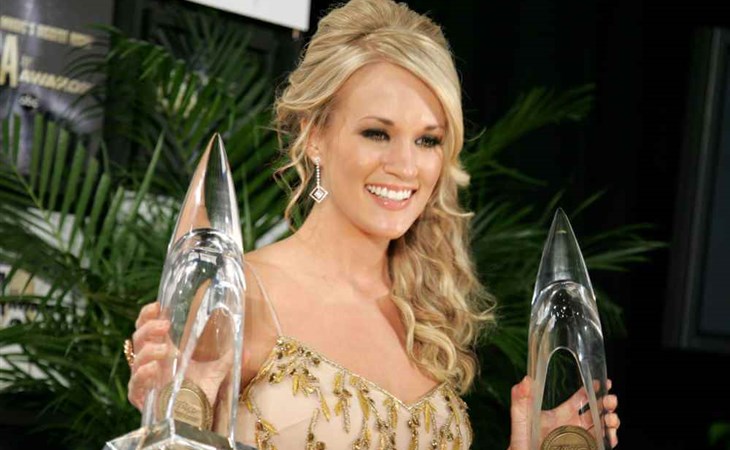 Country’s reigning princess won big last night. And as you can see, Carrie Underwood’s stayed close stylistically to her roots. The waves, the curls, the gold tacky dress… this is a girl who knows how to please her fanbase.

Having said that, it’s apparently no secret – Carrie Underwood isn’t exactly a sweetheart. Rumour has it she’s a demanding, crusty, petty bitch…the kind of bitch with demands and sh-t, like don’t talk to me, like I want this and that, and do you know who I am? At least she was last year.

From the sounds of it last night… not likely. Am told she allegedly had no time for most other female artists especially newcomer Taylor Swift and Kellie Pickler. Supposedly she feels threatened and was not terribly kind or gracious to Taylor, apparently visibly irritated when Taylor showed up in a similarly shaded prom dress.

As for Kellie – she had a meltdown on stage and now some are claiming Carrie was laughing about it all night, openly deriding the girl for being so “embarrassing”. Sources say Carrie that while Carrie is an industry phenom and undoubtedly talented, her ego is growing out of control, to the point that she is not winning any friends among Nashville’s established.

But look at her. She looks so sweet. Like wholesome country corn. A girl like this can’t be a bitch, right?