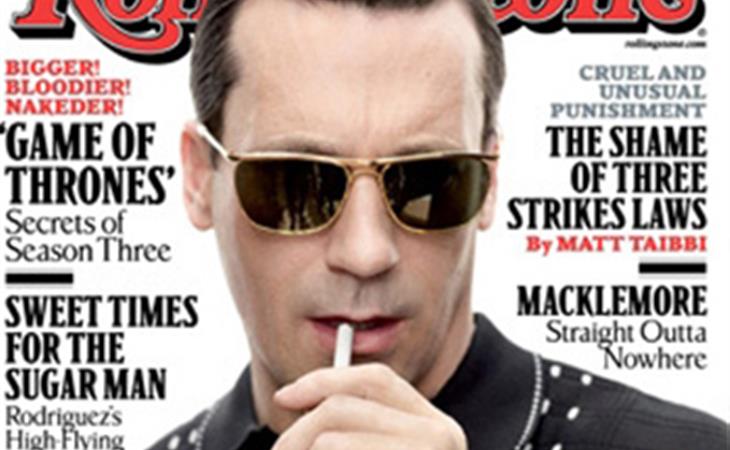 This will be the third article in the last week featuring Jon Hamm's dick. That is, if I were to submit an itemised list of my job assignments over the last 7 days, "write about Jon Hamm's dick" would appear 3 times. That balances out all those emails from Twi-Hards/Michael Fassbender fangirls/Henry Cavill fangirls/Benedict Cumberbatch fangirls, and Ashley Greene supporters (they exist, I know) voodooing the sh-t out of my life...I guess?

In a new interview with Rolling Stone to promote the upcoming season of Mad Men, Hamm told the magazine:

"Most of it's tongue-in-cheek," he tells contributing editor Josh Eells in his first solo Rolling Stone cover story. "But it is a little rude. It just speaks to a broader freedom that people feel like they have - a prurience."

"They're called 'privates' for a reason," he says. "I'm wearing pants, for f-ck's sake. Lay off. I mean, it's not like I'm a f-cking lead miner. There are harder jobs in the world. But when people feel the freedom to create Tumblr accounts about my cock, I feel like that wasn't part of the deal ... But whatever. I guess it's better than being called out for the opposite."

Why is Jon Hamm being so unfunny and unsexy?!?

There is a clever and smart way to answer the irritating online obsession with his cock. Being serious about it is not. God Jon Hamm, what happened to your personality?