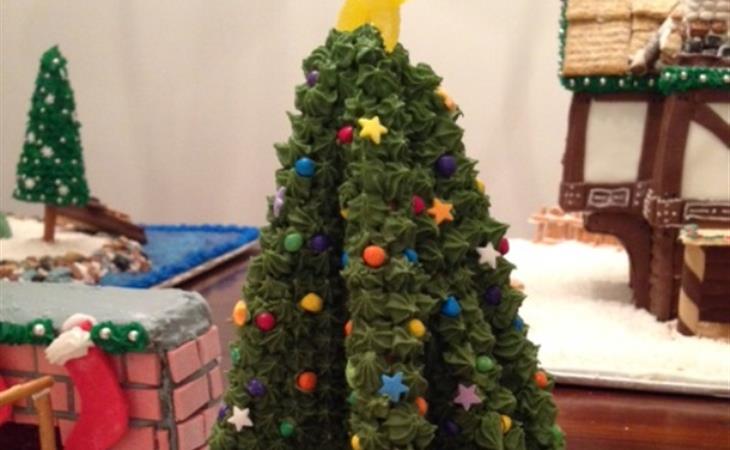 It’s an annual tradition at my friend Lorella’s. And it’s become a very serious tradition here at LaineyGossip – judging the Gingerbread Houses! Click here and here to see the entries and winners from previous years. We don’t f-ck around.

The gingerbread houses were built last night in a live competition. Everyone started off with the same store-bought kit. Using multiples kits is allowed. But everything you see (except for the cardboard base) must be EDIBLE and created on site. Like you can’t pre-order marzipan stockings or trees and bring them in. All details were created ON SITE. Here are the contenders of 2013:

1."Come In From The Cold": Note the hearth and Christmas tree. The fireplace is made with tinted icing and custom fit chewing gum "bricks". The tree is made of larger sheets of gingerbread cut and assembled, then decorated. The gifts are made of candy, and the ribbon has been piped on.

2."Christmas On The Coast": A lighthouse and the keeper's cottage are decorated for Christmas in. The lighthouse is covered in cinnamon and spearmint gum. A fondant ocean in multiple shades of blue laps at a candy coated chocolate shore. A fondant rowboat with pretzel oars is parked near a cinnamon stick log pile.

3.“The Christmas Cottage”:  Multiple store-bought gingerbread house kits used to achieve a festive two storey cottage. White and chocolate rolled fondant was used for the Tudor style beams. A tiny pair of skis and spaghetti ski poles lean against the house. Zoom in to see the tiny piping details and decoration on the beams.

4."Oh Come All Ye Faithful": A church and neighbouring stone cottage are featured. The church is made completely of piped royal icing, giving it the effect of being made of lace. The icing was piped onto parchment paper and allowed to dry, then the pieces were assembled (gently!) to construct the church. The fence is made of yogurt covered pretzels. The cottage is covered in candy coated chocolate "stones", and the chimney is covered in dried beans.

5."Santa's Cleared For Takeoff": Santa's elves are hard at work. Fondant elves, control-tower snowman, reindeer and the Big Guy himself surround this pretzel-log cabin. The reindeer's antlers are made of dried pasta, as is the "hay" under Santa's cookie and fondant sleigh, which the elves struggle to pull out with some licorice rope. The reindeer have an easier time, relaxing in their Popeye candy stick enclosure, and enjoying a drink from their candy-sprinkle trough.

Construction began at 11am and went on for more than 12 hours. In the end, there was almost a tie as the judge could not decide between first and second places. The competitors forced the judge to declare ONE winner. I’m not telling you who that is until you decide your favourite.

Email me: [email protected] with your vote (leave the number of the house you vote for in the email title)! Will let you know tomorrow.

Until then, Mimi’s taking her clothes off in Aspen again – it’s that time of year!

PS...if you're viewing the houses from the home page on the main site, click the date at the top to go into the full article and see all the photos.