Have you seen the clip of Tina Fey on Inside The Actors Studio yet? I won’t spoil it for you if you haven’t -- attached below. Tina, obviously, is the best, and everyone’s girl crush, including Duana, the Duana who once urged parents to “deny your children their dreams”. What would Tina Do?

“With my kids, so far it seems to be about me holding them back.”

In response to her daughter “losing her mind” about Quvenzhane Wallis’s Oscar nomination, Tina revealed to PEOPLE recently that she told Alice to:

“Let it go. Step away. I made her write out a poll so everyone who came to our Oscar party had to [vote] ‘Should Alice be allowed to be in movies?’ And I was the only person that said ‘No.’ I was like ‘Unfortunately for you, I am the only vote that counts.’” 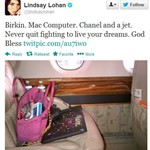 PS. In case you missed it in Tingles yesterday, here’s the Canadian cover for my new Book-Love, Life After Life by Kate Atkinson. It really is a monumental literary achievement.

Tom Hardy: the puppy and the PA