If thereâ€™s one thing Jennifer Aniston is gonna do itâ€™s wear a boring black dress. #Emmys

You know when someone makes a joke and you’re mad you didn’t think of it first? Yeah ^^.  I mean, was there really any doubt? When she won the SAG in January (OH MY GOD IT FEELS LIKE YEARS AGO) she wore a plain *white* column, and she’s worn the occasional red column, but – can you imagine if she showed up in something, like, indigo? Green? It’s almost comical to discuss. What if she wore a yellow dress!?

Fine. So she’s predictable – but that cuts both ways. I think it was incredibly smart of the Emmys to have Jennifer Aniston in studio with Kimmel early on, because one excellent skill she has is her unflappability. She’s never once seemed flustered in a live situation, which is a lot harder than it looks, even if she’s been doing it so often it would seem to elicit roughly the same amount of nerves as a family birthday party.

She impressed the hell out of me when the fire gag went rogue, and she remembered to say “Oh, shoot” instead of sh-t – I would 100% have owed the FCC money on that front, but she didn’t miss a beat or break a sweat.

It’s possible that we undervalue the sameness of Jennifer Aniston. She’s been The Same for so long, and sure, she’s never gonna surprise us in a backwards tuxedo, but she’ll be there and be chill, and isn’t that comforting in these times of intense trial and uncertainty?

But it’s that sameness, that incredible commitment to not changing too much, just a little at a time, that should have clinched her the Best Actress award last night. The fact is, people like Jennifer Aniston. It would have made Emmy voters happy to be able to choose her. The fact that they didn’t, and the award went to Zendaya instead… that’s significant. (To be clear, I thought Zendaya was outstanding and deserved to win, but you can totally see a world where Emmy voters might have thought ‘next time’, right?)

Lainey and I both emphatically felt that Alex Levy on The Morning Show was the role Jennifer Aniston has been building to all this time. Her mannerisms, her flintiness, her slightly resigned posture when she’s even a little tired – she had all those in her toolbox for years waiting to come out and help her be this incredibly buffed and polished woman who shoved down her actual feelings and instincts for years. I like a lot of her performance in that show – but it wasn’t enough to sway Emmy voters.

I think it’s because, quite honestly, the show is desperately uneven, so you never knew if you were watching some tour de force acting, or just someone walking around desperate to (literally) find the plot. The show famously had a lot of growing pains, or birthing pains, if you will, and I think the uneven tone or pace, which really did fix itself by the last couple of episodes of the show hurt Aniston when push came to shove for Emmy voters. How can you choose something that’s almost amazing but not quite there when there are so many other incredible options to choose from?

I also think she suffered from most of her scenes being with Reese Witherspoon’s character. Reese herself is great, as we know – but Bradley Jackson was a made-up spaghetti character who was never enough of a foil for Alex Levy, so we didn’t see all the effort involved in every interaction the way we did when Aniston’s Alex had scenes with Steve Carell’s Mitch … or Billy Crudup’s Cory Ellison.

I kind of feel like describing Billy Crudup’s performance in The Morning Show was low-key a competitive sport last fall. He played the character as off-the-wall, possibly dissociative, manipulative and Machiavellian but never creepy or an asshole, delighted by power games but never getting off on them. He is utter nonsense on screen and a total joy to watch, and I don’t care how many Succession boys were in his category, to me it is the simplest, clearest win of the night.  He elevated every scene he was in to a cross between, like, Knives Out and The Affair, and it was thrilling.

It’s also clear that if Alex Levy had had more scenes with Cory Ellison more often – their terrifying, who-kills-who-first energy ramps up to 11 as soon as they’re in the same frame – she would have won a statue last night. Remember this dreamscape nightmare joy?

The heartbreak of all this isn’t that she didn’t win. Jennifer Aniston has lost more awards than any of us can remember. It’s that I think she really likes this show. Or this team, or being this involved as a producer. It’d be nice to see all that joy manifest as a great show… but it’s never a guarantee.

I’d wager a whole lot of money there will be a lot more Cory-vs-Alex in Season 2, if and when they’re actually able to go back to work… but I think it’s gonna be quite some time before we see any more of The Morning Show. Like they had to go back to the drawing board to incorporate the pandemic,  but unlike many shows, they draw stories from real life, ripped from the headlines - and you can’t exactly write an ‘after the pandemic’ story when we’re still in the middle of it.

Which is too bad, because I want to see where the show can go with the training wheels off, with the vestiges of last year shaken off (and with Apple TV+ execs a little less green where making shows is concerned). I feel like it could really be something everyone (including Witherspoon, who kind of got a raw deal) could sink their teeth into. Though as @FilmFatale_NYC points out, there wasn’t enough attention paid to the great work by Gugu Mbatha-Raw. I think the show will miss her energy and wonder if they’ll find a way to use her in Season 2…

They didnâ€™t even bother to recognize Gugu Mbatha-Rawâ€™s work on #TheMorningShow and that is mind-boggling to me. She had the standout performance to me. #Emmys pic.twitter.com/avZY1F5CKL

Speaking of sinking your teeth into something, last night our group chat was 4-2 against Mark Duplass being absolutely sexy as hell.

I was in the 2. But so were a whole lot of you on Twitter, where I ran for backup:

First message to get a resounding 'no' on the group chat during #Emmys2020 is that Mark Duplass absolutely could . I would.

And I’m not sorry, because that’s where I found this shot of his Emmys getup – tuxedo jacket and flannel pajamas, messy hair, perfect salt & pepper stubble…

I wish his character’s name wasn’t ‘Chip’, but other than that I can’t wait to spend more time with his frustrated beta character and the way he chews his lip when everything’s getting f-cked up beyond recognition.

But I know most of you are here for Aniston. Here she is getting ready with longtime hairstylist Chris Mcmillan, and prepping for the Great Fire Stunt onstage. If you didn’t see the face shield, couldn’t you squint and pretend it was 2010? 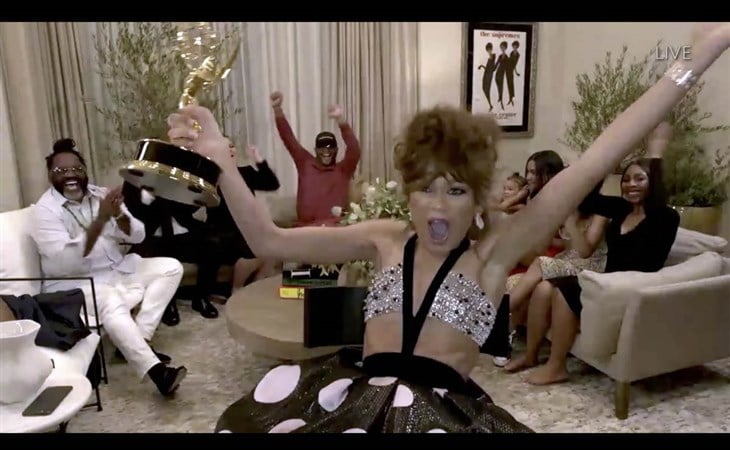