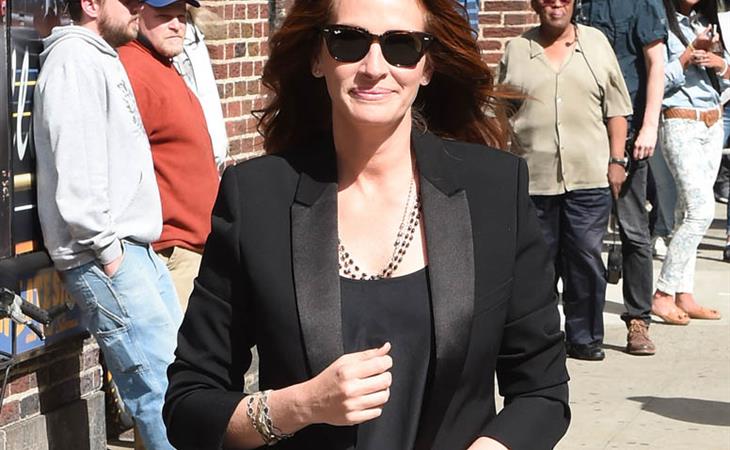 Julia Roberts always gets the last word, so it makes sense that she would get David Letterman’s last kiss before next Wednesday’s big sign-off. After all, she is his favourite guest. He admitted it back in 2001 and he was clearly just as smitten last night.

She was smitten too… But in a way that’s uniquely JULIA. As you know, Julia will always make the interview about her, in the most endearing (or annoying) way possible. She’s had 26 interviews with Dave, so she came out wearing one of his signature varsity jackets. But the way she reacts when she sees that somebody in the audience is paying homage the same way? Classic Julia.

“For the record, I had this on before the small-batch mustard man… I said UGH! Now David Letterman is trying to think I was trying to be in the thing he was doing…”

Then she goes on to recount how she stole the jacket from “Sweet Jenny” (how patronizing! How perfect.) and says how she and Dave are now “connected” for “17 more minutes” before letting out her signature cackle. Julia also repeatedly boasts about how much smarter she is than everybody else in her “kind of peer group,” and how that is what has made her stand out from the other starlets Dave has interviewed over the years. Next she praises his intelligence in a lovingly backhanded way that brings the focus back to her.

“We have what, four minutes of our life together left?”

Look at her delight when she sees she’s about to watch a montage of their flirting and kissing moments on the show…leading up to the kiss.

But the countdown is key. As Lainey notes, Julia on Letterman is always must-watch-TV because she’s a three-block guest. This time? Only “17 minutes.” Or “four minutes.”

Why? It’s all because Dave’s longtime bandleader Paul Shaffer was going to be a guest on the show that night, and they needed time for his interview.

What makes this even funnier (other than Julia’s likely seething for the sake of seething) is because of this milestone Julia and Dave moment from 2001:

Fresh off her breakup with Benjamin Bratt (!!), Paul asks her if she’s “getting laid these days.” Now that’s real. Julia answers begrudgingly and talks about how she’s single. Minutes later, she sasses him right back and makes fun of his hometown Thunder Bay, in Canada. She also shuts him down a few months later when promoting Ocean’s Eleven.

Now, Paul’s bumping her time down on the show. It’s almost poetic, isn’t it?

But we still got primetime Julia. And that’s always a good thing.

Speaking of Julia, in that same Benjamin Bratt-confrontation sitdown, she and Dave mock the Chairman, George Clooney.

Dave: "He's kind of a load anyway, that George Clooney, isn't he?"
Julia: "Oh, what a burden. George the burden."
Dave: "When he's doing scenes with you, what do they have him standing on?"

And the best part? George Clooney will be on Dave’s show tonight, for his last appearance. I wonder if he’ll be a three-block guest too? Or if they’ll talk about Julia. After all, according to E!, she’s now best friends with Amal. Ahem.

PS: SEND IN THE FLOWERS.

These are vintage, must-revisit clips. For lunchtime. 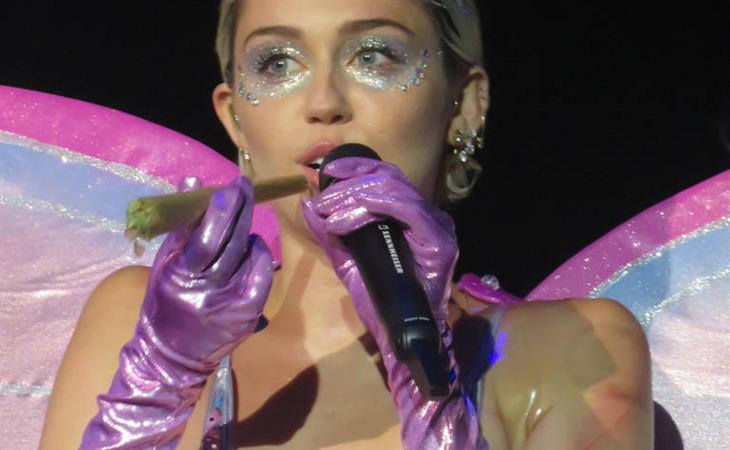 Miley Cyrus gives me an excuse to talk about Brandon Flowers 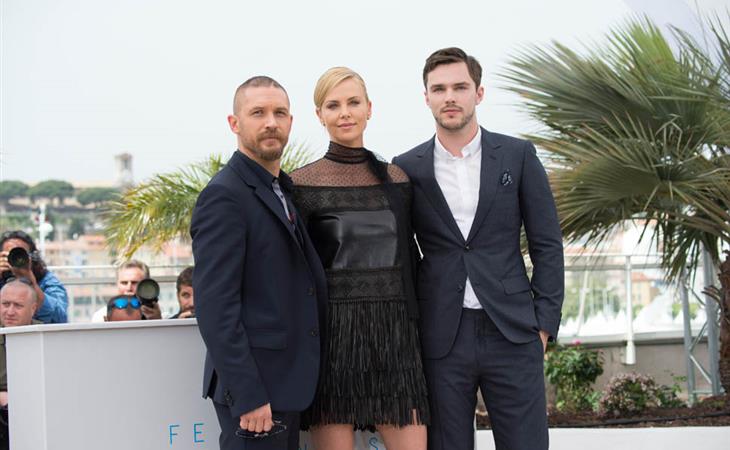 The “Men” vs Mad Max