At this point you’d have to be Tara-Reid-Level crazy to doubt that we’re in for at least another 30 years of Bieber domination.

I kind of get what’s happening here. Justin’s been bulking up, he’s single and these pictures will certainly have the fan girls screaming extra hard for the next week. Also, I’ve been an 18 year old boy hitting the sexual crescendo of puberty, so I sympathize with the awkward sexual expression taking place on this hotel terrace. When you‘re in the mood to actually f-ck everything that exists in the whole world, showing some skin to the masses probably seems like a real fun way to spend the afternoon.

What has me worried though is the arrogance of it all. It makes me concerned that the Bieber child-to-man transition everyone was wringing their hands over back in the Baby days might actually be happening right now?

One thing about these pictures that’s extra special is that I think, in the ones where he’s just in his underwear, that’s his fully clothed dad standing behind him? Maybe it’s just a security guard? Either way, hopefully the real adults in JB’s life can tell him to pull his damn shirt down.

Need further proof of his boner-brain? Check out the pic below from a recent meet-and-greet! 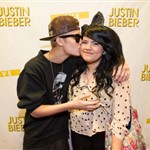 Who are your friends?

This is their work ethic