It’s Lindsay Lohan’s guide to life. When Lindsay Lohan isn’t stealing, she’s begging and borrowing -- from anyone: sheiks, shady billionaires, Charlie Sheen. Charlie Sheen fronted her the money to pay a stylist to dress her for AMFAR a couple of weeks ago. Click here for a refresher. Stylist Phillip Bloch ended up getting her a beaded gown I originally thought was Cavalli, only it turned out to be at $1750 Theia which, I know it sounds like a lot for people like us, but for them...for them it’s the equivalent of $200.

And how did she return it? 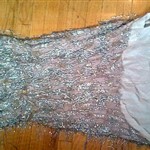 Cut in half, obviously. And probably full of spit and piss.

According to US Weekly:

"She said that the dress had ripped [at a club after the fundraiser] -- she couldn't possibly wear it like that -- so her stylist friend went to the club bouncer and requested some scissors to repair the torn part of the dress. But what bouncer has scissors? She turned it into a mullet! Only a fashiony person would do that! She's out of control and behaving really badly."

Has she run out of people to f-ck to make all her problems go away?

THAT is who Lindsay Lohan is.

You take away all the addiction and whatever else and THAT is who Lindsay Lohan will STILL BE.