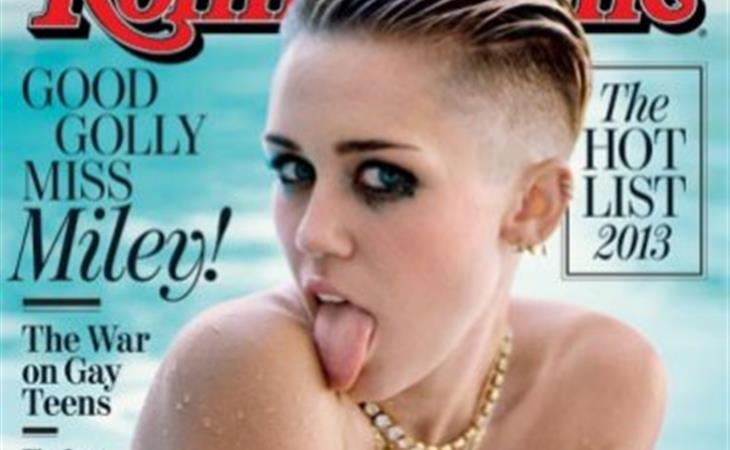 I like this title. It’s the headline they’ve used for Miley Cyrus’s new Rolling Stone cover. My recommendation: if you have 10 minutes today, read the article. It’s mandatory study material for Gossip School, seriously. There’s so much here – child to adult stardom strategy, the fame circle, celebrity entitlement, and, yes, even Girl Sh-t.

Despite everything else that’s been excerpted and highlighted across the internet (focus on her tattoos, her nakedness, Kanye West, etc) in the 24 hours since the cover shot and article were released, this, to me at least, is the most important, insightful passage in the piece and it happens when Miley’s talking about Justin Bieber:

“I'm not much older than him, so I never want it to feel like I'm mentoring him. But I do mentor him in a way. Because I've been doing this shit for a long time, and I already transitioned, and I don't think he's quite done it yet. He's trying really hard. People don't take him seriously, but he really can play the drums, he really can play guitar, he really can sing. I just don't want to see him f-ck that up, to where people think he's Vanilla Ice. I tell him that. Like, 'You don't want to become a joke. When you go out, don't start sh-t. Don't come in shirtless.' But the thing is," she says with a laugh, "I think boys are, like, seven years behind. So in his head, he's really, like, 12."

It’s not bad advice, but the advice isn’t what’s telling. What’s telling is how she described herself: “I already transitioned”.

She has, indeed, transitioned. Bieber is still a baby. Bieber still hasn’t convinced the world that he can take a fan from the time she’s 14 and make it so that she’s still a fan when she’s 24 – that’s the “transition”. The transition is preventing people from outgrowing you and making them want to grow with you. Avril Lavigne couldn’t do that. Avril’s fans are still 14. You know who did do that though? Britney Spears. And you know who’s doing that? Miley Cyrus.

Hannah Montana ran for 5 years from 2006 to 2011. The kids who grew up on Hannah Montana are young adults now. They’re hitting the club. They think they can swagger. They’re all over the Miley lifestyle. We Can’t Stop is the anthem.

This is what she means when she says she’s “transitioned”. And the significance of that expression is that it implies Intention. Calculation. Manipulation. Which has informed her entire image, the image you can’t get away from right now: tongue, tats, twerk, tits -- it’s the closest we’ll come to an admission.

I wasn’t sure that Miley had “it”, the elusive quality that seems to strike only once in a while, the “it” that keeps us caring about Britney. She does.

10 years ago, October 2003, this EXACT issue a decade earlier… you know who was on the cover? Check it: 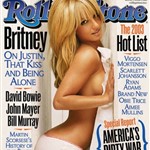 There’s something to that, you know?

The difference between Miley and Britney? Not in the transitioning but in the nature of that transition. Given what we know now about Britney, it’s unclear if she was fully conscious during that process. Miley’s awareness of it is certainly more tangible. Whether or not that makes it less organic is up for debate. I’m not sure that they can separate what’s real and what’s manufactured anymore, even as they’re manufacturing it.

Miley isn't bothered by people who called her performance a disaster. "I wasn't trying to be sexy," she says. "If I was trying to be sexy, I could have been sexy. I can dance a lot better than I was dancing." She knows sticking her tongue out isn't hot and that those weird stubby pigtails aren't flattering ("I look like a little creature"). And she even knows it's ridiculous for her to twerk.

And she’s right when she points out that there’s something to be said in the fact that she took a lot more sh-t for what happened at the VMAs than Robin Thicke – not unlike Janet Jackson who had to eat it all by herself when Justin Timberlake slunk away after the Super Bowl:

Her observation about society’s selective pearl clutching isn’t without justification either:

"America is just so weird in what they think is right and wrong. Like, I was watching Breaking Bad the other day, and they were cooking meth. I could literally cook meth because of that show. It's a how-to. And then they bleeped out the word 'f-ck.' And I'm like, really? They killed a guy, and disintegrated his body in acid, but you're not allowed to say 'f-ck'?

The problem with having a point sometimes though, especially where celebrities are concerned, is that it encourages them to delude themselves into thinking they have a point ALL of the time. And this is where we find Miley when she’s challenged on the minstrelsy, her use of black dancers and little people.

If there's one thing that bothered her about the (VMAs) fallout, it was the idea that her performance was racist, or a "minstrel show," because, critics argued, she appropriated a dance style common in black culture and used black backup dancers like props. "I don't keep my producers or dancers around 'cause it makes me look cool," she says. "Those aren't my 'accessories.' They're my homies." Meanwhile, she argues, the idea that she's somehow playing black is absurd. "I'm from one of the wealthiest counties in America," she says. "I know what I am. But I also know what I like to listen to. Look at any 20-year-old white girl right now – that's what they're listening to at the club. It's 2013. The gays are getting married, we're all collaborating. I would never think about the color of my dancers, like, 'Ooh, that might be controversial.' What do you mean?" she says with a laugh. "Times are changing. I think there's a generation or two left, and then it's gonna be a whole new world."

I’m not convinced that Miley sat down and actively decided – oh let me use black girls and little people like her inferiors and afterwards I’m going to send a cheque over to the KKK. But in refusing to acknowledge how her stylings may be interpreted, and how that interpretation might compound institutionalised stereotypes and prejudices, she disrespects those who live with those stereotypes and prejudices, minimising their experiences, marginalising their realities, silencing their voices, which… ahem… is racist.

That ignorance is supported and encouraged by her entitlement – the fame entitlement. It’s why she refers to her “homies” as the people she “keeps around”. But that’s a strange way of saying it, isn’t it?

"I don't keep my producers or dancers around 'cause it makes me look cool."

OK, but the fact that you call it “keeping around”, like they’re possessions, is probably why you can’t see that you’re using people like props. Consider too her relationship with her best friend and assistant Cheyne:

Over on the couch, a guy named Cheyne is cracking up. Cheyne, 22, is Miley's assistant, and also her best friend. They've known each other for a long time, but Miley hired him only last year, before she went to Philadelphia and Miami to record her new album. Cheyne was working at Starbucks at the time. "And I was like, 'Fuck that,'" Miley says. "My best friend can't work at Starbucks! We've been working ever since."

No. She doesn’t. They never do. They insulate themselves in a world full of the same – the celebrity circle, all of them holding hands in solidarity, rationalising their existence.

So there’s Kanye West, who walked into Miley’s dressing room right before she went on stage at the VMAs and told her:

“There are not a lot of artists I believe in more than you right now.”

And Pharrell, who texts her while she’s hanging out with the Rolling Stone journalist, to tell her, in a thousand short words, that:

"The VMAs was nothing more than God or the Universe showing you how powerful anything you do is. It's like uranium – it has the power to take over lives or power entire countries. Now that you've seen your power, master it. You're not a train wreck. You're the train pulling everyone else along."

And even Lil Kim, who messaged:

"My little pumpkin, I just had to tell you you're so f-cking smart. I love you and all the press you are getting. Sad I didn't run into you at the VMAs. Keep killing it, boo."

Is that the Miley Cyrus version of “I have black friends so I can’t be racist”?

Oh she goes there.

"We could have even gone further, but we didn't. I thought that's what the VMAs were all about! It's not the Grammys or the Oscars. You're not supposed to show up in a gown, Vanna White-style" – a little dig at Taylor Swift. "It's supposed to be fun!"

Watch. Taylor Swift will be all over Liam Hemsworth by Christmas.

Like I said, it’s a fascinating read. And it’s a read I look forward to coming back to in 2 years. Because I can’t wait to see how it will read then. Click here for the full Miley Cyrus profile in Rolling Stone. 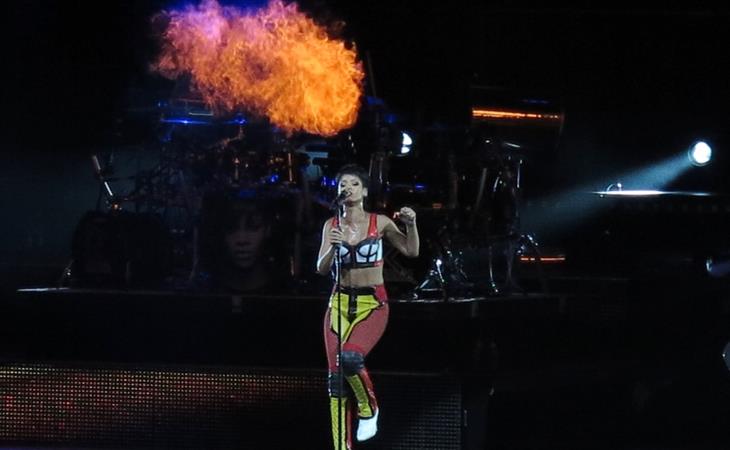