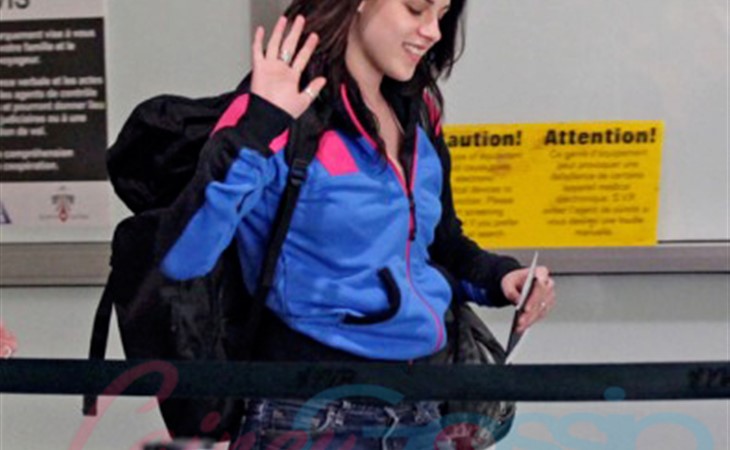 Oh Vancouver. We have our city back.

The rest of them left on Friday – Taylor Lautner for Los Angeles, and director Chris Weitz along with Kristen Stewart and Ashley Greene to Italy for 4 days of filming. As you can see, Ashley walked into a garbage can thanks to the brainiac leading her to the gate.

Twi-hards are now rejoicing that Kristen and Robert Pattinson are reunited after a brief separation and a scare from a friend of Emile Hirsch (more on this in an upcoming article later today). The two had dinner last night in Montepulciano where New Moon will shoot with members of the crew. Kristen was photographed rolling a joint and smoking it. She found a hookup fast!

Attached – a couple shots of Kristen walking around the set during prep. Shooting begins on Tuesday and the planned schedule is as follows:

First two days will focus on Bella trying to make her way through the throngs of festival revelers to reach Edward. She jumps in the fountain, wades through it, towards him. Of course she makes it in time at which point he pulls her into a building.

By the way – if you’re wondering, yes, they’ll be trying to include the “slamming” into his body.

When they reunite, Bella and Edward do kiss followed by the arrival of Jane and the others.

They’ll also film something from Alice’s perspective on these two days. She “sees” Edward sparkling in the sunlight.

Some the driving sequences will also go ahead on Tuesday and Wednesday, schedule permitting. .

On Thursday they’ll be jumping into a hole in the ground. This will likely be Robert Pattinson’s final day barring any major delays – heads up to you twi-hards who’ve made the journey.

After that…a Twilight break. Until August.

More on Pattinson at amfAR

Chicken Fried at the wedding