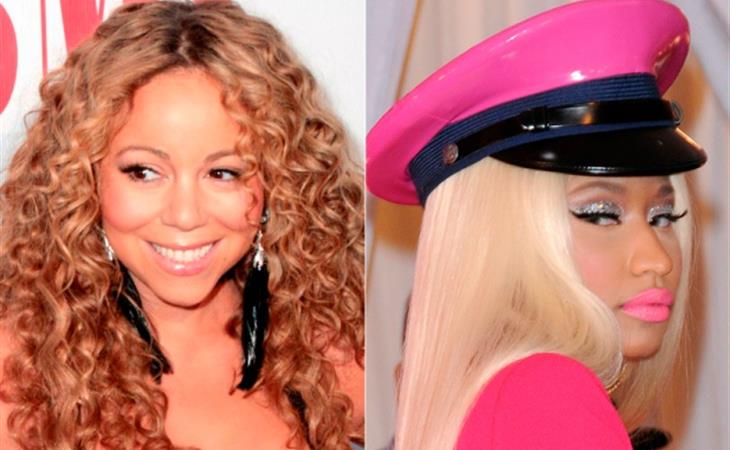 Nicki vs Mimi and her resumé

There was no throw-down yesterday in North Carolina during Idol auditions. TMZ reports Mimi and Nicki Minaj decided to chill themselves out, supposedly “embarrassed” that their scrap was made public. It’ll be a temporary peace. Nicki is young; she’s not yet learned that sometimes you have to eat it and wait for a bigger score later on. Anyone can cuss anyone else out any time. But to truly hurt them, to burn them and leave a scar...? This requires patience. Nicki doesn’t have the patience.

According to TMZ, this is what Nicki’s having a hard time with (I love this quote so much I’ve re-read it at least 20 times):

“(Mariah) keeps bringing up how many records she's sold, name dropping people she's worked with, how many tours she's done, and how many Grammys or awards she's won ... Nicki is tired of it."

First of all...like... for those of us who know and love our Mimi, OF COURSE. Here’s what I wrote on July 13 and it required NO SKILL:

“There is only one challenge for Mimi on Idol and that is whether or not Mimi can actually provide commentary on anyone other than herself.”

So where is this coming from, this expectation that Mimi becoming a judge would mean that the conversation would cease to be about her?

And second, between auditions and the live shows every week, we still have 7 months to go. If Mimi’s already getting to Nicki now, because she keeps talking about herself, which, I mean, that’s just the way the world works, you know?, how is she going to deal when the wind machine arrives? The wind machine isn’t even there yet and Nicki’s already lost her sh-t. At this rate, Mimi will break her before US Thanksgiving.

What Minaj needs then is a better Bitch Coach. Right now she’s showing herself to be a f-cking amateur.

And to those who wonder if this might still all be a stunt for ratings -- Bill Zwecker of the Chicago Sun-Times, a veteran gossip, reports that Keith Urban’s having a hard time with the situation. Says a Zwecker source:

“Keith is such a wonderful, easygoing, lovely guy. This kind of drama was not the reason he signed on to be an ‘Idol’ judge. … He hates nastiness in any form.”

I too have heard from a couple of contacts who’ve been in touch with Urban. They’ve confirmed that Urban is having a terrible, terrible time. He is uncomfortable around conflict and the stress of being caught in the Mimi Minaj confrontation is weighing heavily on him. More on him later. Let’s not let him spoil our party right now. Mariah Carey’s American Idol is turning out even better than I expected.