Octavia Spencer wore a gorgeous sort of pale ochre-y deep cream piece of fanciness which suited her really nicely with an off-centre neckline of which is surprising and unusual without being too try-hard-y. This is exactly the right note you want to strike for the year after you win an Oscar – understated and beautiful and it’s not about you but oh, how good the year has been to you.

Except all of that would kind of have been ruined if one of her family saw her on TV and noticed, as per reader Cat P, that E!, the same network that would have fawned and squealed and loved upon her last year, suddenly thought she was Viola Davis. 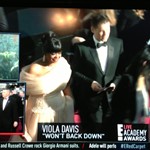 It’s gross, and it’s unfortunate, and yeah, it’s totally just an innocent mistake, but it’s also one of those mistakes With Significance, and you wish you didn’t know why it happened, but you totally do, and so you feel gross. Like I need to point out the obvious, but nobody has trouble distinguishing between George Clooney and Ben Affleck even though they were both producers on the same film, right?

Too gross?  OK, fine, cleanse your palate with the fact that she looked appropriately skeptical while MacFarlane was doing his asinine best to irritate everyone, and that she has four projects coming out this year, and that she didn’t change before Vanity Fair because she knows damn well she looks good.