There’s lots being said this week about the whole Jodie Foster coming out situation but, because my heart wants to drag things down to the lowest common denominator, I’d like to use this as an excuse to talk about how gay One Direction is…or at least how gay One Direction pretends to be. We’ll bring it back to Jodie in a second, but first look at this… 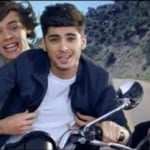 This is a screengrab of Harry tweaking Zayn’s nipples in their video for Kiss You. It’s the latest example of the group’s penchant for homo affection, something I’m sure you’ve seen but here’s a little refresher just for fun. A crotch grab at a press conference…[gif]

…these  guys have never been afraid to get close.

The practice of gay-baiting is nothing new. Straight male dancers on America’s Best Dance Crew (RIP to the best show ever) loved to use this technique with mimed man-on-man kisses all the time and surely you’ve seen drunk guys at frat parties play “Chicken or Go”. With One Direction though, they’re putting their own modern spin on this – one that I think marks a new acceptance of gay people in the younger generation and adds a whole new sex-positive element.

The typical punch-line of a gay-baiting gag is that gay sex is disgusting and therefore something we can all chuckle at. With One Direction though, they’re not really laughing. Sure, it’s cheeky but the joke seems to be that they’re acting out in public. If Harry grabs Niall’s butt on stage, you’re supposed to notice because he’s interrupting their choreography…but it never seems like you’re supposed to laugh that they’re touching each other’s junk – that part is designed to be cute, to be playful, and yes, to turn you on.

Compare this behavior with the previous generation of boy bands. The Backstreet Boys and ‘NSync NEVER would have worked this angle. During the millennial pop boom, it was more acceptable to wear plastic pants and have white guy dreadlocks (*side eye @ Chris Kirkpatric*) than it was for Lance Bass to come out of the closet. According to what I hear, this homo-repressive atmosphere is still preventing at least one of the stars from that era from coming out publicly.

Now, let’s bring it back to poor Jodie. If Lance Bass had to pretend to be straight in 2001, imagine what kind of hell Jodie Foster had to deal with as a young lesbian in 1970? As little effort as Jodie put into keeping her sexuality a secret, this is something she’s been silent about in the public eye for 40 years WHILE facing harsh criticism for not championing the gay community. If she was a little defensive and strange about the whole thing on Sunday night, I don’t think it takes much imagination to understand why.  So I say we should applaud One Direction for their grabs and their smooches. Odds are at least one member of the new wave of boy band-ers will be coming out of the closet in the future and maybe, if 1D continues to break barriers, this won’t have to happen with an awkward acceptance speech at The Grammys 2043.

Attached - Harry Styles getting on a private plane today (with his bandmates, not pictured) in London.

The Sexiest Best Actors ever