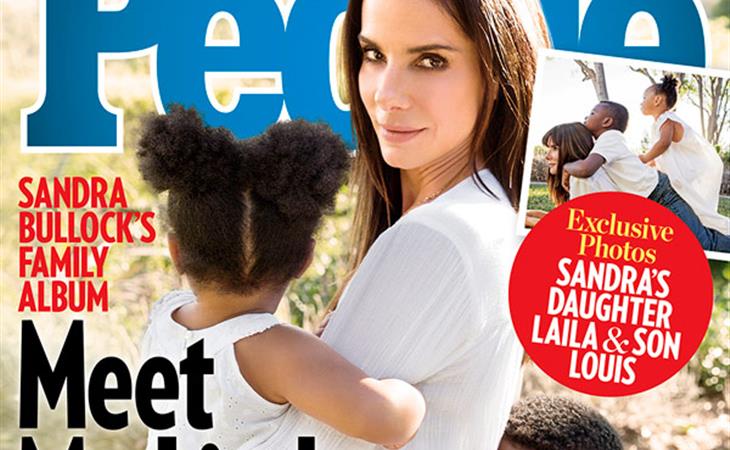 Please be warned that I will be gloating in this post. A lot gloating.

It was reported a couple of months ago that Sandra Bullock adopted a girl. You’ll recall, she denied it during promoting for Our Brand Is Crisis. Sort of.

"There is only one adopted child in my household and his name is Louis. If I had a second adopted child, everyone would be hearing about it. I would be loud and clear and say 'Yes, I have officially adopted a second child.' Right now, Louis must be it."

As I noted at the time, she used her words very carefully, very specifically. Which she’s been known to do. Back when she and Matthew McConaughey were dating, she’d always say, “We’re friends, we’re friends”. Which was not a lie, but not quite the truth, because as she clarified later, she didn’t say, “We’re JUST friends”.

So PEOPLE has the exclusive, a cover shoot and an interview – Sandra introducing us to her daughter, Laila, pronounced “Lila”. Laila is 3 and a half years old. Louis, her brother, is on the cover too. And the photos? They were taken by Bryan Randall. 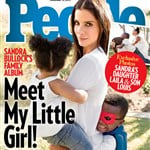 Radar reported yesterday that Sandra Bullock has adopted a baby girl. A pap agency has photos of Sandy on Sunday cradling a baby walking into Cedars-Sinai. At post time, those pictures have not been published and apparently, Sandy’s legal team allegedly sent out requests for media outlets not to buy them. So far there’s been no confirmation from her rep about whether or not it’s true. But if it were not true, a simple statement about the child  being a family friend would probably have made the entire story go away.

PEOPLE was the magazine that had the exclusive of Sandy and Louis five years ago. PEOPLE has so far remained quiet on this story, if not because they’re getting another exclusive then because they need to maintain a good relationship with her so that they can negotiate one.

When Sandra wants to tell us something, she does it on her own terms. Even when we were all up in her business because Jesse James was stepping out on her, no one had any idea about Louis. She decided when and where.

With Laila, the secret wasn’t as tight. But note, the minute it didn’t go her way, she immediately shut it down, Olivia Pope-ing her way back in control. Here’s what I wrote on October 7th, gloating continues:

It was reported last week that Sandra Bullock adopted a baby girl. As I mentioned, I heard that she got papped going to Cedars-Sinai with an infant in her arms but no one bought the photo, presumably after stern warnings.

Today PEOPLE published a new exclusive picture of Sandra with Bryan Randall, the first definitive shot of them together as a couple.

The way Sandra Bullock and her boyfriend, Bryan Randall, met is so sweet! https://t.co/Aa16Ajz5ay pic.twitter.com/RehQtiPSzc

PEOPLE reports on how they met (a photo shoot for Louis) and repeat details about how Sandy took Bryan to Jennifer Aniston and Justin Theroux’s wedding. As for those adoption rumours, just this one line:

There has been no comment regarding rumors that Bullock has adopted again.

You think this photograph happened accidentally? Like the pap just got lucky? The photo is credited to GC Images. And in my experience, GC Images is usually distributed through Getty which is pretty celebrity friendly. I noted last week that PEOPLE had remained quiet on the adoption story when every other outlet was all over it – click here for a refresher – and wondered about a possible negotiation. Is this it? Or will there be more?

The “more” just got confirmed. So, you know, again, for next time, when a celebrity claims that privacy is impossible…is it? Is it really? Click here for more on Sandy and Laila and Louis. 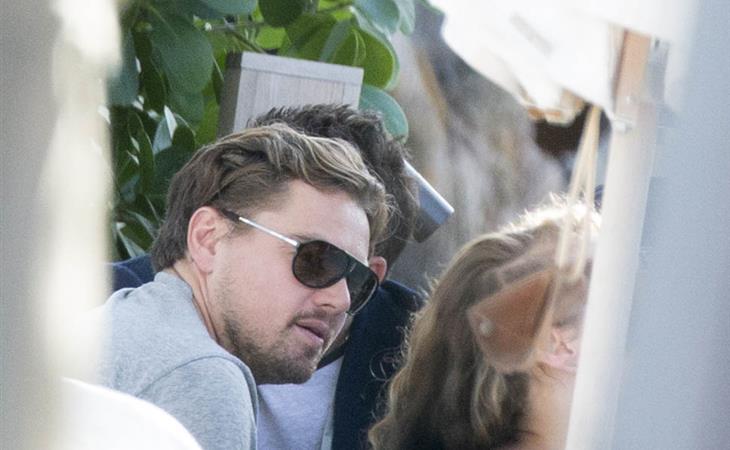