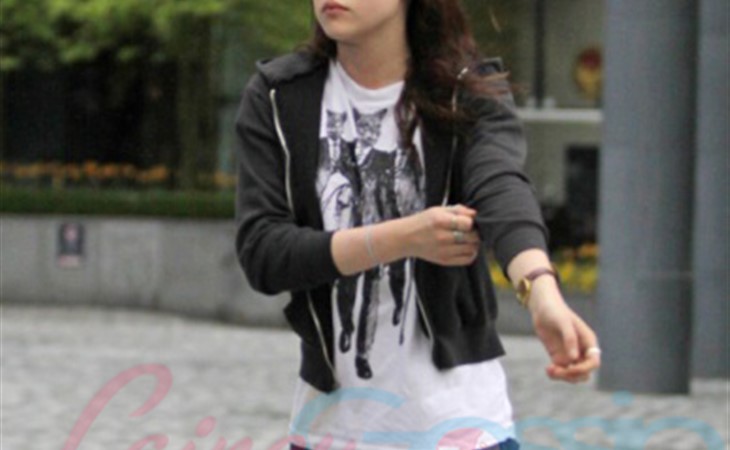 Hung over and hung over

First - Kirsten Stewart in Vancouver on Monday, day after the New Moon wrap party, where my sources say she was smoking some BC bud, on her way in and out of a hair appointment looking like it was a rough night. Or a great night. Pretty much what Laura and I look like now. Except for us it’s been 4 nights in a row. Vodka face bloat, not cute.

Kristen is back at work on set today shooting Bella sad and depressed at home scenes.

Kristen was staying at a different hotel from Pattinson for most of the shoot. It’s a popular hotel for celebrities in Vancouver but it’s wide open access. Pattinson’s hotel has several exits and he would also get picked up in an underground parkade, far from the stalkers. Around the time of the New Moon cast party however, Stewart switched to Pattinson’s, supposedly so that she could get away from the twi-hards. You twi-hards are free to draw your own other conclusions.

Over in Cannes, this morning, Robert Pattinson, after a boozy night on Paul Allen’s boat, posed for a photo call on the beach before international interviews all day. Laura was working at the Grand and saw him going from outlet to outlet, running his hands through his hair, dutifully promoting Twilight/New Moon. Am told he seemed overwhelmed by the absurdity of the situation – on a dock, by himself, photographers calling out. It was early, I was yet again rushing to the Palais to file, and once the young French tourists heard he was there, it was a hormone surge you could feel from miles away.

Had a colleague text me, she was trying to make her way to the pavilion while it was all going down and her words were:

Get these high school musicals out of my f-cking way!

Last night, am told Pattinson was happily enjoying the attention of several euro social climbers on the yacht, and had a moment with Orlando Bloom, no doubt exchanging tips. It was like a pretty-off. A pretty explosion on the cote d’azur. Pattinson was enjoying the open bar. Liberally. As he should. This is Cannes, after all.


Exclusive photos of Kristen Stewart from PUNKD Images
Pattinson and Bloom photos from Splashnewsonline.com and Wenn.com