I’ve had enough of your love

“I have no strong feelings either way except to say it feels very Anthropologie which I’ve tried so hard to like over the years but have recently decided to stop forcing it; I’ll never get off my vintage bike and walk through the tall grass with my eyes closed and the sun on my face, you know?”

This is Taylor Swift in Paris shooting her new video. I can’t shop at Anthropologie anymore.

Swift’s new album Red drops this month. She’s promoting it on magazine covers now. Check her out on the cover of Marie Claire UK: 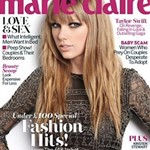 As expected, Taylor talks about love. A lot.

“Even after it explodes into a million pieces and burns down and you're standing in a pile of the ash of what it once was thinking, 'Why did I have to meet this person, why did this have to happen?' But then, when you make eye contact with someone across the room and it clicks and, bam, you're there. In love again."

Is Swifty like JLo? Is she in love with love?

As for whether or not it’s fair to her exes to sing about them, Taylor justifies it like this:

"Well, it's not like it's in fine print. But music is absolutely everything that I am and everything that I stand for. It's not my fault if someone gets into a relationship with me and then cheats and I write a song about it."

There’s more love talk if you can stand it in her interview with Glamour. You can read it over at Celebitchy here.

Aaaaaannd...now you’re annoyed. Me too. Mostly at the Anthropologie and her ohmygoshing at a loaf of bread. Annoyance aside though, to me it’s more disturbing than anything else. Love and cupcakes, castles and fairytales -- is that all she is? Other than hand hearts, what do young fans, female fans, take  away from Taylor Swift? I worry that LOVE is all they do take away. Love as the only goal for girls. That that’s all we do. That that’s all we want.

Love is important, of course it is. But is love...the only? Specifically romantic love? In a society that is still predominantly patriarchal, what is the consequence of Love as a girl’s primary occupation? And it’s not just Taylor Swift. The Love messaging is everywhere -- look at Twilight, one of the most popular book and film franchises of the last 10 years, a female-driven phenomenon, that tells the story of a girl who had no life before love and whose life was completely defined by it afterwards. That messaging is gender-specific. They’re not selling it to men, they’re selling it to women, and I’m not sure I want that to be who we are. That’s not even, really, what Taylor Swift is either.

Taylor Swift had her own publishing deal at 14. She wrote over 250 songs but would not let the labels hand them off to other singers because she wanted to hold on to her own material. By the time she was 20, she set the record for youngest artist ever to top the year’s best selling album list. (Source) I could list all her awards and even more accomplishments but you already know my point -- that Taylor Swift is an extremely accomplished young woman and that, yes, even though we write what we know and she knows a lot about her (limited kind of) love(s), Taylor Swift knows a lot more than just love. But for some reason, what we get about Taylor Swift, from Taylor Swift, is ONLY love. And I’m not sure where the circle starts here -- whether or not it’s an image she insists on pushing or whether or not it’s an assumption we insist on pushing on her. I do know that I’m ready for a different one though. It would be SO much more interesting.