Everyone else to the left, indeed. Even her mother on the cover of British Vogue.

Check out this amazing shot posted on Beyonce’s Tumblr -- two directors chairs positioned side by side. For Mrs Carter. And, most importantly, one for the BIC.

Who cares about the magazine?!?

The Mrs Carter Show kicks off in Belgrade on April 15. A teaser has been posted though for something happening tomorrow: 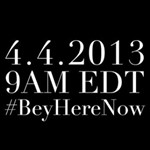 They do love their 4s, Bey and Jay.

Many are speculating it’s a new single. Hopefully one that’s better than Bow Down which was sh-t. Hopefully it’s the cover of Amy Winehouse’s Back To Black that she collaborated on with Andre 3000 for The Great Gatsby soundtrack that Jay-Z is producing. Gatsby is opening the Cannes Film Festival. Will the Carters show up at the Palais for the premiere? She has a show that night in Antwerp which, I mean it’s nothing a few helicopters and presidential travel logistics couldn’t take care of, right?

Like most, I’m excited about what Beyonce’s Back To Black will sound like, especially as they’re saying B’s version is a “very different take” and Jay explained too that the song would be “interpreted with a modern twist”. (Source)

He left no time to regret, kept his dick wet

I dunno. Amy was pretty modern about that already.