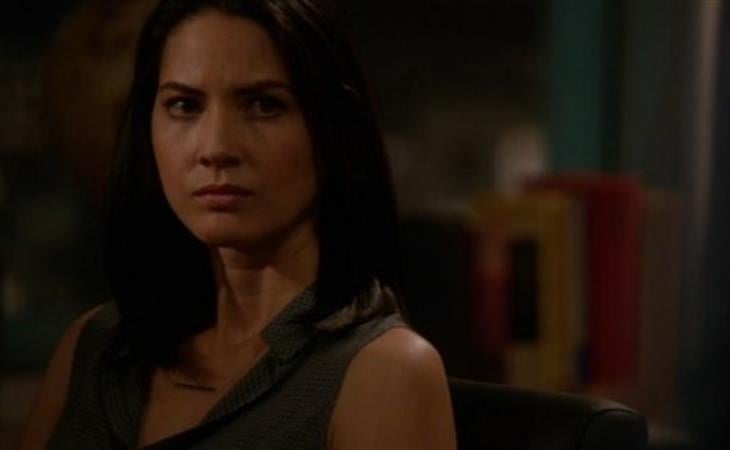 Working in television is only unusual for one reason, and that’s because a select group of peoples’ work is available for anyone else to watch and judge; an even more select group of people are the faces of all that work. As I’ve said before in other contexts, nobody goes, en masse, outside buildings to critique their architecture or electrical wiring or the catering therein.

So the flaws are visible. And that’s great. It’s spectacular, actually. Because one thing that continues to happen in adult life is mistakes. But we’re better at covering them up, I think, and get quickly and sharply out of the habit of admitting to them if we don’t have to.

Everyone makes mistakes though and in television you have to own up to them and correct them, usually on-air and immediately. And everyone makes mistakes this episode, and it’s why it was the most compelling since the season began. Maggie’s mistake – which, for once, didn’t seem randomly assigned because she’s a young, dumb girl but because she’s a young, dumb producer – is something that would totally happen. One of the things I liked best was that she had to tell Mac in front of Charlie. That would have stung, but she had to. And it would have been one more slight to contribute to the new person that is acid Maggie. (Pre-hair chop, obviously, because why mess with a timeline at all if you’re not going to make it utterly incomprehensible?)

I don’t mind acid Maggie, actually. I could get exhausted once again that she’s doing something that gets her called out via Jim, and that Jim checks in with Gary about Maggie’s mental state instead of with Maggie, but I’m almost not surprised about things like this any more. What I am is pleased that Maggie gets over her childish cutesiness and is telling Jim that he’s boring, and she’s not trying to please him anymore. She knows that her work isn’t suffering (until it does) which is something else I like. Maggie is having the worst time of her life, and it’s making her into an actual woman. This may be an entirely accidental construct, but it’s happening.   People become who they are when they go through things.

Similarly, I had all the rage in the world at Sloan’s storyline, primarily because I can’t believe she would be so stupid. Am I naïve? Am I too out of the loop? I know people send dick pics. I get that. I even get the impetus to take pictures with your new boyfriend, even if the idea of posing would seem like a bit of a busman’s holiday for an on-air person like Sloan who has to be in makeup and visible on camera all the time. But come on. She’s 30, and she’s got a genius IQ, as we’re often told. You take the pictures, you have fun, and then you go through them and delete any that are identifiable. Don’t you? Or wouldn’t Sloan? I find it hard to believe this is the first time she’s been in this situation and that she’s so blindsided.

But I didn’t mind the situation it put her in, necessarily. A grown woman with lots of intelligence and smarts whose fate was being decided by men in boardrooms. She hides in a dark room for a while, and then, realizing that’s not going to work out,  goes to handle another man in a boardroom, who may as well just have answered a casting call for “smug and obnoxious”. I think Sloan’s characterization is uneven and for someone who’s supposed to be so smart, she really rarely gets a win – but I didn’t mind that, in the middle of a sh*t sandwich, she gets a little satisfaction.

She got a little, too, from Charlie via that palm-slap. I guess I have to accept that those two have some sort of a vibe, even though I don’t want to. Charlie seems a little too much without conflict for my liking.  He delivers his information, he agrees or doesn’t with Will and Mac at any given time, and then he goes home to his life? I haven’t seen Charlie really bite his nails since his informant disappeared last season.   This informant, on the other hand, is much more amusing to me and I could have watched him for hours – but again, even his information about Genoa isn’t really making Charlie flinch. Can Charlie flinch?

Will can, we learn, when it comes to his father and contact. This was the least-baked story of them all, to me, even though it had a little competition from the kid who was going to come out and whatever was happening on Twitter. I do like that Mac is more and more clearly defined as we go forward. Yes, she has a soft spot for Will, that maybe translates as a blind spot where his dickishness is concerned. But she knows how to control him with honey while ruling with much more of an iron fist over the rest of the staff. I didn’t like the whole business with yelling at Neal (and really, what is he there for, speaking of characters with no stakes? Is the whole point of Neal just that we like Dev Patel, so why not? ) because it makes her childish, but I did like her prioritizing Will’s time and focusing on what would make her anchor best able to do his job. It’s almost like she’s a boss or something. Similarly, while no actual exec would have had time to pick at the Rutgers kid for that long, I appreciated that she was able to explain to him that she has some standards for her show.

In short, and as usual, when The Newsroom is about the Newsroom – not the dating life of Will McAvoy or the heartbreak of African schoolrooms or apologies at Shake Shack – it has an idea of what it’s doing, and could be great if it would get out of its own way.    I don’t hold out a ton of hope for this, not least because they’ve decided that messing with the timeline is going to be a whole-season commitment – but halfway through the season, the show begins to look like what it could be if it weren’t so self-conscious all the time.