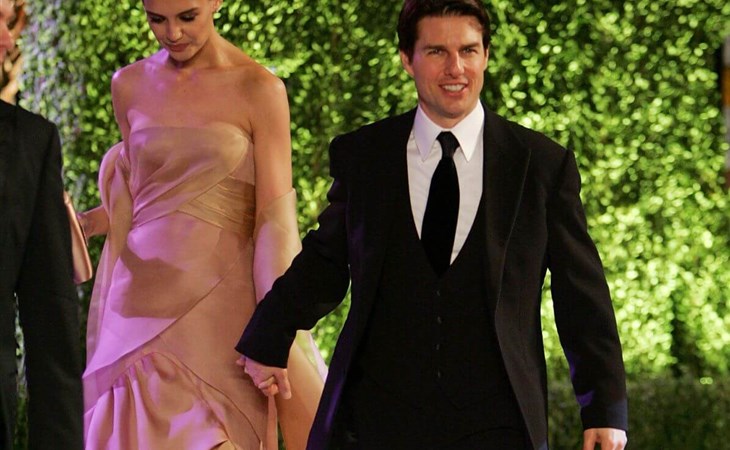 OK the photo alone is ridiculous enough but watching it is even funnier. Somewhere out there I hope Vanity Fair releases for public consumption their own video feed from the event – f*cking hilarious. In the meantime, I’ll try to explain it as best I can. As you can see – he’s “presenting” her. And that’s actually how it happened.

So the Vanity Fair party is set up with a bleachers for the press in 3 tiers. Credentialed outlets get the spots closest to the ground, then you have to jostle for position on the upper levels. The magazine also has its own camera crew with unlimited roving access. Once the stars exit from their limos and make their way over to the photo area, it’s a flashbulb explosion and most of them stop on the logo for a few seconds for the money shots before heading inside. Tom and his RoboBride approach the photo area. Like most other celebrity couples, you expected them to cross arms, smile, pause, pose, and then get away from the frenzy. Ummm…no. They take their time walking, she behind him as usual and then, like a magician with a magic trick, he stops, he leads her by the hand to centre stage and makes like a “flourish” with his arms towards Katie, and of course by this time she’s in position – soaking up every moment. I’m telling you – it was so f*ckin’ cheeseball you couldn’t tear your eyes away. My producer Michelle couldn’t stop laughing, we had to re-enact the moment over dinner tonight just to relive the moment. Because it was so… weird. I mean there’s posing and then there’s just…loser. Seriously, I don’t get it.

But I will say that they both looked great. His bloat seems to have dissipated, the best he’s been since MI:3 and she was radiant. A little too bridal, but radiant nonetheless. And tall. And thin. And vacantly pretty. And exactly how she looks in photos – ten years away from Nicole Kidman.