Back to back Jacks and Xenu’s rap

Here’s Tom Cruise at the London premiere of Jack Reacher last night wearing a lot of blush and bronzer. Contouring makes all the difference, you know?

While Tom’s promoting his current release, a trailer for his next release, Oblivion, was released online yesterday. He plays another Jack. So many Jacks. Why have we run out of movie names? Oblivion is yet another dystopia, only this time, as Tom Cruise tells the story, it looks like a moderately budgeted Laser Cats, the sketch from Saturday Night Live...

And not good crazy but crazy, crazy, like Morgan Freeman living in the shadows crazy. Also, here’s a good example of how Hollywood people + sports sometimes make no sense. Look at Tom take that free throw. Hopefully it’s supposed to be the first time his character ever takes a free throw because...I mean... if there was any doubt as to how totally UNcool Tom Cruise has become, that free throw tells you everything.

You know what else is uncool, Jennifer Aniston?

Scientology... before, during, AND after.

Katie leaving Tom gave everyone, including ex-Church members, permission to attack. Since then, every week there’s a new leak exposing Camp Xenu as a house of horrors. And they’re launching another offensive right now to f-ck with Tom’s publicity game while he’s trying to sell Jack Reacher. Yesterday a new video was posted on Gawker featuring the voices of several former Scientology worshippers, including Nazanin Boniadi, who auditioned to be Tom’s gf a few years ago and then rejected because she wasn’t deferential enough. Click here for a refresher.

It’s an anti-Sci rap written by Titziano Lugli, supposedly a singer/producer, who left the Church in 2010. As you can see, he’s a total Tom Cruise/John Travolta hybrid. Also, he seems really pleased with himself. Look at him jamming along to his musical creation...

Like, I get it that they all want to bring down the evil Xenu and his weird little leader but...

Why are they all so dorky?

They’re dorky when they’re in it, and they’re still dorky when they’re out of it. This rap is dorky, right? It’s maybe not as dorky as John Travolta Christmas dork, but it’s definitely more dorky than it is cool. Click here to hear the entire song. Be warned though, the fontrum is really, really high here. 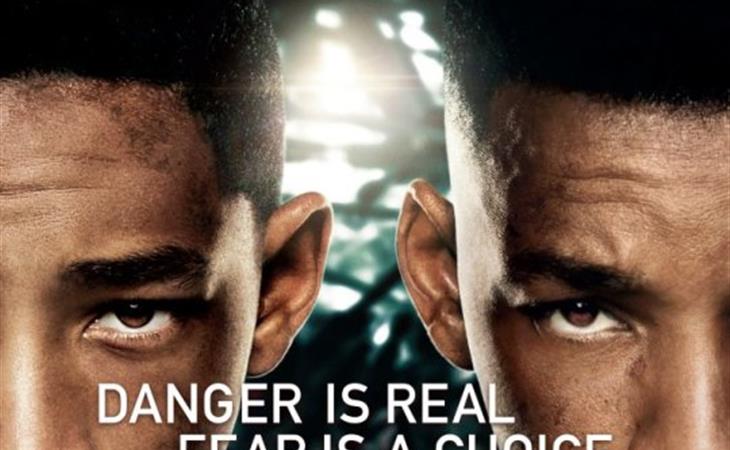 Will and Jaden Smith by M. Night Shyamalan looks terrible