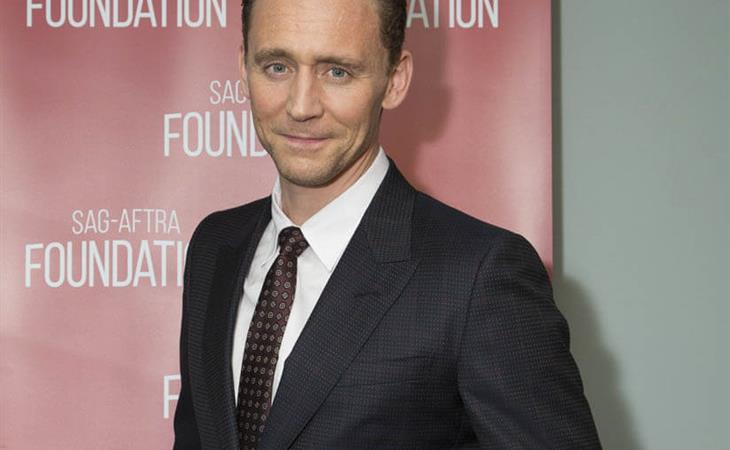 Emmy voting begins today and ends August 29th. The Emmys happen on September 18th. Last week, to get right up in voters’ faces, Tom Hiddleston was in LA for several promotional events and interviews in support of The Night Manager. Here are some shots of him at the SAG-AFTRA Q&A on Friday. More on Tom’s schedule in a minute. First, let’s talk about his ass.

Tom showed his ass in The Night Manager during a love scene. Everyone was talking about it back in March. NSFW, obviously:

Tom was honoured for his ass work and named Rear of the Year – an honour the LA Times asked him about a few days ago while he was campaigning. What I like about Tom is that he wasn’t too precious for the question and answered it with good humour:

“I didn’t know it was going to be on the bucket list until it happened,” Hiddleston quipped in the Envelope’s video studio earlier this week. “I’m just happy it happened. I’m happy that that’s something that has come into my life in a way that I didn’t expect. Sometimes the universe hands you something on a plate that you didn’t expect and, for me, it was the Rear of the Year award.”

Leonardo DiCaprio wouldn’t have taken that so well. I LIVED INSIDE A BEAR FOR A WEEK, don’t ask me about my ass!

But OF COURSE Tom Hiddleston would talk about his ass. And, frankly, I’ll take his ass talk and his exclamation point attitude over Leo’s Struggle. You’ll note though that an actor can talk about his ass all he wants, can almost welcome the objectification, get an award for his ass and a nomination for an award for his acting. Is all objectification, then, created equal?

In other Tom news, he flew commercial from LA to Australia and back to work on Thor 3 and return for the Emmy hustle. The hustle is over but he hasn’t been seen at LAX. For what it’s worth though, Taylor Swift fans, who are accustomed to tracking her planes, observed that one of her jets left Burbank airport on Saturday and was heading east, towards Rhode Island, where she was with her family last week. If he is really there, isn’t it amazing that the paps haven’t found them kissing on the rocks yet?