Will Smith is Focus…but Hitch

The first trailer for Will Smith’s upcoming Focus was released yesterday. He’s a con man. Margot Robbie is his protégé. While watching the first 30 seconds, I was like, oh, this feels familiar. Then I realised, it felt familiar because he’s basically the guy he played in Hitch; Focus just gets darker because criminals find themselves in more dangerous situations than love coaches. Sure.

Kristen Stewart was initially supposed to be in this movie, right? There was a lot of gossip about why she was either dropped or dropped out. In the end, it’s a bonus for her, because Focus, at least from this preview, looks terrible.

Focus looks like a film that’s supposed to remind us that Will Smith is still charismatic and hot. Mostly hot. I can see, thank you. He’s ageless. He has a great body. He has great skin. He’s sexy. But, you know, just in case that wasn’t clear, just in case you doubted that Will Smith still has it, a young woman with a body like Margot Robbie’s is obsessed with him.

Will Smith is 46 years old. Margot Robbie is 24. You’re telling me it would have been impossible to tweak the story so that Will’s love interest/adversary could have been a contemporary? A more mature woman? Oh, wait, wait, wait. It’s because, riighhhht, Will has to be a “mentor” to the female character. Men always know more, especially cool criminal men. You know, at least in True Lies, James Cameron gave us Jamie Lee Curtis. Who was the heart and soul of that movie as we watched her try to be a spy. At the very least, Cameron gave Arnold Schwarzenegger a wife who was actually a believable wife and not a 20 year old model, which is how Michael Bay would have cast it. So now I have to tell Will Smith to F-CK OFF for making me compliment James Cameron.

So to answer your question, Russell Crowe. It’s not that older actresses are still trying to be ingénues and that’s why they can’t find interesting parts, it’s that men write movies FOR MEN, and in movies that men write for men, all the women HAVE TO BE ingénues. It makes men feel better about themselves.

Also, Focus is out in February. I wouldn’t exactly call that confidence which is what Hitch was always trying to teach. Is that irony? 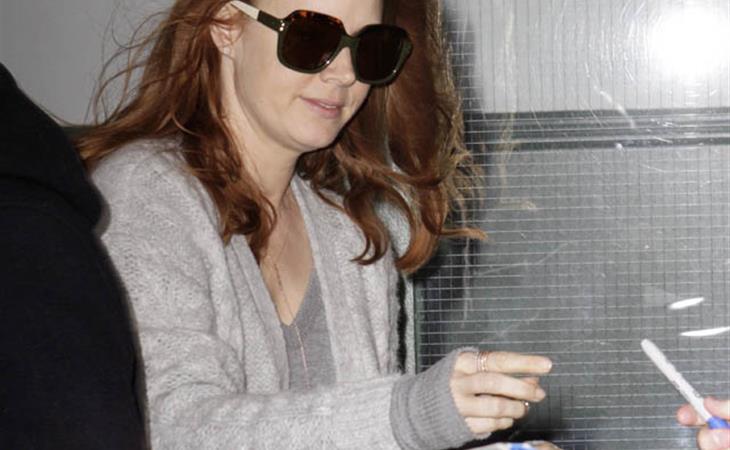