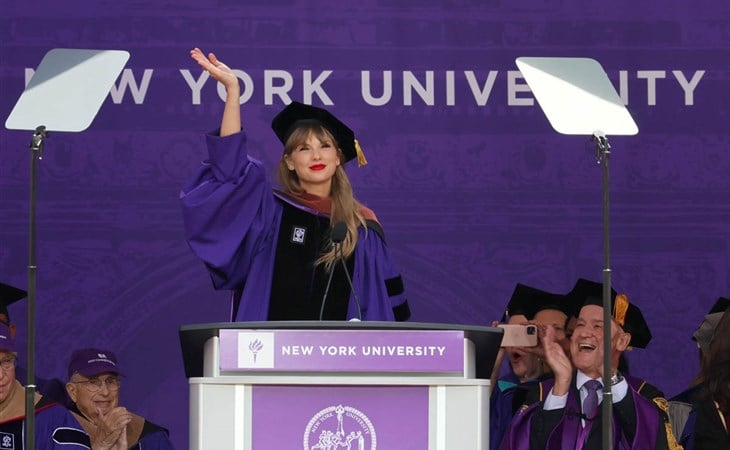 Taylor Swift fans were disappointed last week when May 13 came and went and there was no surprise album drop. Instead Taylor saved her first public appearance of 2022 for Yankee Stadium, where she appeared yesterday to receive an honorary doctorate in fine arts from New York University and deliver the commencement address. She shared a video on Instagram of her on the way to the ceremony and was adorably excited:

Taylor celebrated with the Class of 2022. And as she and everyone else has noted, it’s fitting because of course she’s been “feelin’ 22” all year, which she referenced at various points of her speech. Video of Taylor receiving her doctorate and her remarks is below – beginning at 2:47 with an introduction by Jason King, Chair and Associate Professor at the Clive Davis Institute of Recorded Music, Tisch School of Fine Arts. And it is indeed impressive, her contribution to the artistic community and to humanitarian causes, her professional achievements, and her imprint on popular culture. She has earned this degree. It was no doubt a thrill for many of the graduates in attendance to have her as part of their graduation memory.

One of the parts of her speech that’s getting the most attention is when she talks about “cringe”. She says that cringe is inevitable and to accept that one day, our cringe will turn into laughter, that it’s pointless to avoid it because nobody is immune from cringe, which works into her bigger picture, and a common theme in these kinds of speeches, about making mistakes and learning from our regrets. And she encourages people to keep trying, in spite of cringe and regret. That effortless isn’t worth aspiring to and not to give into “our culture of unbothered ambivalence”.

This is a great note and to be honest I wish Taylor had leaned harder into that part of herself in her remarks. I know she was trying to relate to the graduates, but at the same time, she’s the one with the doctorate, she’s an undisputed leader – a few of them just might be coming to her for a job one day, which is why I wanted to see more of that leadership energy and less time spent on the chorus she keeps coming back to.

Because Taylor being Taylor, of course she talks about her critics, about being cancelled by the internet and almost losing her career. I mean…

I get it, and I actually do. I’ve felt cancelled by the internet too, it’s a sh-tty experience, even though I deserved it, and so I can empathise with Taylor that in those moments, when it’s happening in real time, in that intensity, the only perspective you have is the one your buried in, and you do go to the worst place, you do believe that it’s over.

But that’s why it’s almost never a good idea to make big decisions or declarations when you’re in the middle of it – specifically because you don’t have the full picture yet. And the full picture of it is that Taylor was never cancelled. Few people are ever really cancelled. She certainly was in no way ever going to lose her career. But that’s how she remembers it, and because she’s remembered like this, it has shaped every subsequent narrative she tells about herself.

Which is that she’s the female artist who had her love life blown up in her face by the media and the public, almost as though it was her unique cross to bear. I watched Taylor’s speech after I watched Jennifer Lopez’s Halftime trailer and, well, it’s not like people haven’t tried to define JLo’s career by her love life. So it’s an interesting case study in comparison – of these two female pop culture titans and how each has handled that kind of scrutiny on their personal lives. JLo and Taylor both acknowledge it, but there is a subtle difference in their approach.

Duana once described JLo as Teflon, nothing ever sticks to her, and a big reason for that is because she doesn’t let it stick to her. That’s why we barely remember ARod. This is one of her superpowers. Taylor’s superpower is that she actually sticks to it, and almost… weaponises it. Which is ironic because part of her speech is about letting go of things. I’m not sure that’s necessarily true for her – it’s not that she can’t or won’t let go, it’s that she holds on to it so tightly she alchemises it into something she can use to retaliate with that much more force, and this is a superpower in its own right…only I don’t know if she’ll ever admit to that.

But maybe one day. Because the strongest part of Taylor’s speech, at least for me, is what she says about storytelling. She identifies first and foremost to being a writer. She talks about her love of writing, and that her creativity is peripatetic – her songwriting isn’t limited to genre and she’s gone back and forth from country to pop to folk etc and the big idea she comes to is that everyone is a writer in that way. “Most of us write in a different voice for different situations.” How you describe something on Instagram might be different from what you say in a work email. Your texts to friends read differently than your essays. “We are all literary chameleons”, she says (I don’t think “literary” is the right word here, I would have substituted with “communication chameleon” but whatever, she made her point) because we don’t have to define ourselves by one thing all the time. The challenge is giving ourselves, and others, the grace to embrace that.

Full video of the NYU graduation event is below. Taylor enters the stadium at 2:13 and her speech starts at 2:47. 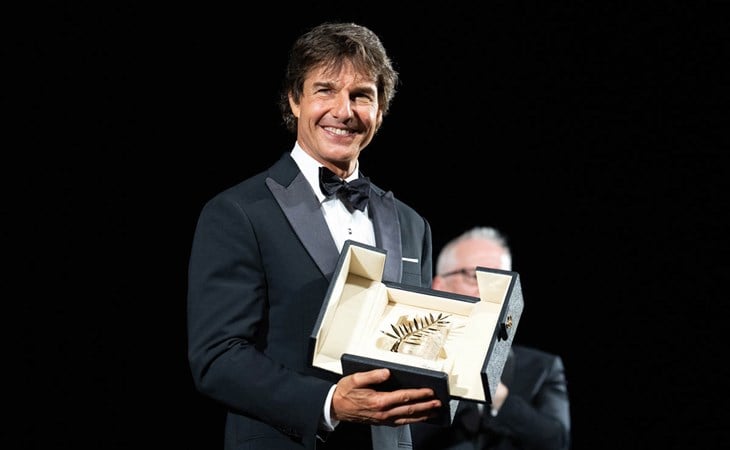 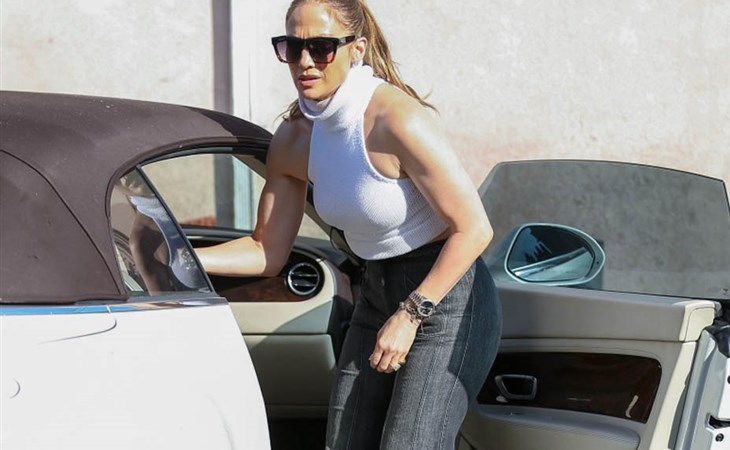 JLo: “But I’m also saying…does the camera got me?”