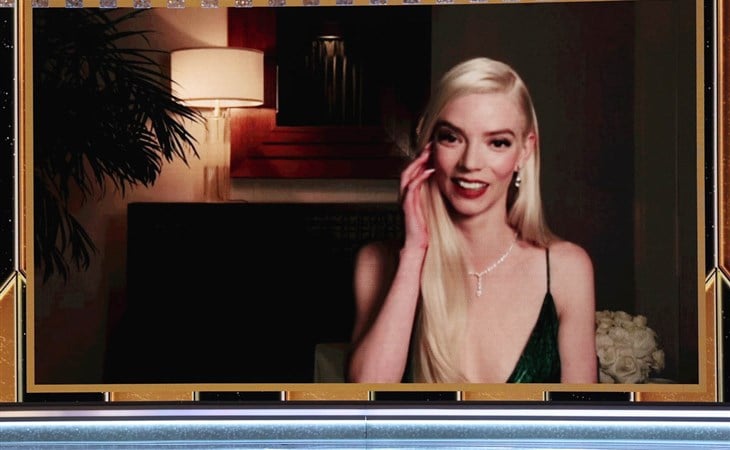 As mentioned in the open, I’m not sure there was that much fashion to talk about at last night’s Golden Globes, and definitely not in comparison to years past or even the Emmys. There were, of course, a few standouts. And two of them were produced by Law Roach, who is becoming a tradition unto himself these days at award shows, pre and during-pandemic in that many of the showstopping looks are credited to him. And at this year’s Globes, if there was a showstopper, on my timeline at least it was Anya Taylor-Joy. She was… unreal in this custom green Dior.

This is… almost unfair. Because of course Anya was a model. She knows what she’s doing with clothes. She knows how to move – just look at the way she’s sauntering around cavalierly in this empty ballroom, like it’s so easy she’s almost bored.

And while posing on this couch, you can tell that that camera recognises in its subject someone who knows how to get the most out of it. After all, this is a winner’s look – most experts were predicting Anya would take her category, and she did. I have no doubt that Law Roach considers this too when he’s making his selections and edits. If you’re not going to be able to get up on stage to collect a trophy, you make a splash on social media. He has some experience with this from Emmys and Zendaya.

Then there’s Tiffany Haddish. She could have been lit better, as Duana mentioned earlier, when she walked out to present but still… this may have been her best award show look ever.

I really love how the dress here is semi-transparent, you can see the silhouette of her legs but it’s not super revealing, just enough for shape. Mostly though, you just want the dress to do enough but not too much because her face is ALL OF IT! There are some people who have faces made for hair this short (not mine) and Tiffany has one. Look at her face! A platinum blonde face!

Like I said earlier – these days, if there’s a star who show’s up on the best dressed list (and Zendaya, of course), Law Roach is nearby. There should be an award named after him one day. The Law Roach Best Dressed Award. For more on Law and his approach to styling the Globes this year, click here to read his new interview with The Hollywood Reporter.