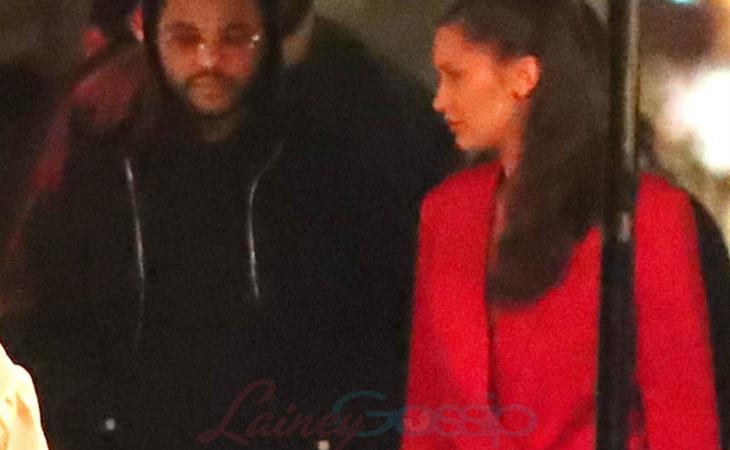 Bella and Abel, all smiles

The Weeknd and Bella Hadid are back on. Last month, Lainey questioned if it was just a “festival thing” since they were spotted at Coachella and then at Cannes. It’s not just “a festival thing”.

Bella and Abel were photographed arm in arm in Paris over the weekend, grinning like two crazy kids in love.  Both Abel and Bella are not typically known for walking around with big smiles. In some of the shots, it looks like they’re trying to keep up their cool demeanour but they just can’t contain their chill. The smiley photos are from their daytime date, when Bella was looking at Abel like this:

Is this the budget version of all the Meghan Markle on her wedding day memes?

Do you look at your man like this? pic.twitter.com/poZGClXSth

Bella looks at Abel like this. Not to judge someone else’s relationship but that’s exactly what I’m going to do. I’m OK with Bella looking at Abel like this if he’s doing the same. During their daytime Paris date, it looks like The Weeknd bought Bella some roses. Do flowers make up for the fact that he was all over model Chantel Jeffries the same weekend he and Bella were getting back together at Coachella? Or that he’s still singing heartbreak songs about Selena Gomez, who he dated right after breaking up with Bella and before getting back together with her? When you take someone back after a breakup, is there a grovelling period? Or is Abel all smiles because he didn’t have to grovel?

Listen, I could be projecting. Maybe they’re just soulmates who found their way back to each other, no drama. Abel is already posting shots of Bella on his Instagram so now it’s officially official. In another set of photos of Abel and Bella in Paris, their regular resting faces are back as they head out for a date night. So far, the reconciliation of Bella Hadid and The Weeknd has been intercontinental. A quick search tells me that The Weeknd doesn’t start touring again until July. Bella is back in New York modeling. Where does their PDA show up next?