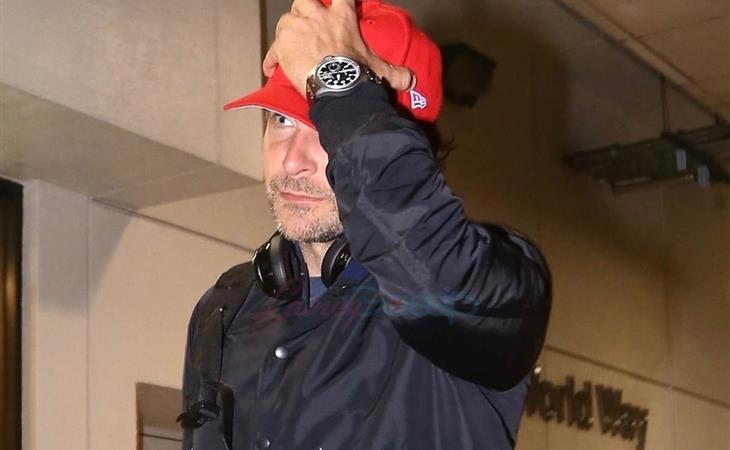 Here’s Bradley Cooper at LAX yesterday heading out of town. Last week Coop was at CinemaCon in Vegas as part of the Warner Bros presentation. They showed the trailer for A Star Is Born, his directorial debut. The reaction was overwhelmingly positive. Coop talked about how he and Lady Gaga made a deal – he would direct the best performance possible out of her but he would also have to sing live because she hates it in movies when you know it’s not the actual people singing. And she’s right.

If the trailer is any indication, their partnership will be a major success. If you recall, the studio moved the release for ASIB around a couple of times. Initially it was to be this September. Then they pushed it up to May. It will now be released in October, which is award season, which means they have a lot of confidence in it. And, given that Bradley is a WB boy, they’ll put whatever resources they have behind it should the film generate critical acclaim, likely out of the festivals – either Venice or Telluride or Toronto or New York.

So… are Coop and Gaga heading to the Oscars? It’s early, obviously. I mean we’re still two weeks from Cannes. But that’s how everyone seems to be talking because the narrative is already developing. Bradley Cooper, over the last few years, has emerged as one of the best actors of his cohort, with multiple nominations. This is his first time in the director’s chair. And it’s a musical. He’s singing and directing and he worked on the screenplay based on an iconic Hollywood film. The Academy has permanent boners over this sort of thing. And Gaga comes with a Gaga-sized profile too. Which is also why she’ll be credited with her stage name and not Stefanie Germanotta as originally announced when they began production.

OK but when do we get to see this trailer? I want to know if our reaction is going to match up to the reaction from theatre owners and journalists. Sometimes, you know, there’s a disconnect.

In the meantime, check out the first A Star Is Born poster which, yeah, I’m kinda feeling here.

I’m also feeling some of the other promo shots.

There are more on that IG account that are of the same vibe. He better die at the end of this movie because people are going to shipping this movie romance and we’re not doing Twilight here for f-cks sake.