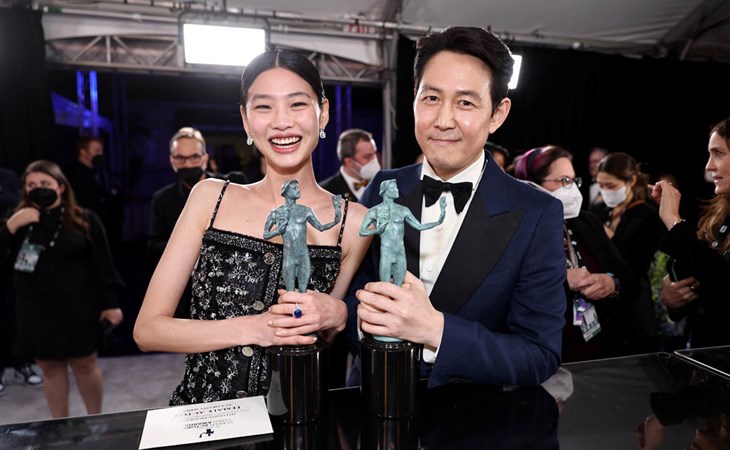 Two years ago, Parasite won the SAG Award for Best Ensemble, the Screen Actors’ equivalent of Best Picture, before going on to win Best Picture at the Oscars. Both at the SAGs and at the Oscars, though, no members of the Parasite cast were singled out for individual acting honours. So it was already noteworthy with the SAG nominations that Lee Jung-jae and Jung Ho-yeon were contending in the lead acting categories. And definitely a big deal that they both won last night (along with the show’s stunt ensemble), making history in the process as the first non-English television series to win acting prizes.

Squid Game has been a global phenomenon, the most-watched series in Netflix history. Which means that SAG membership, in addition to the worldwide audience, had no problem with the subtitles and with the cultural specificity of the series. Good acting is good acting, no matter what language the actors are speaking.

And that’s especially true for Anupam Tripathi, an Indian actor working in Korea, who speaks Korean as a third language, and can now add SAG Award nominee to his resumé…

…and it’s a resumé that is growing.

Anupam was one of five Squid Game cast members who attended the SAG Awards last night as part of team Squid Game’s two tables that also included Kim Joo-ryoung, who played the game’s craziest bitch, Mi Nyeo – an icon! We hated her, we loved her, we were sad for her, even though she had it coming…

This is one of the reasons Squid Game became such an obsession: almost every character had its own fan club. And Joo-ryoung’s Mi Nyeo definitely had her share. Before the series premiered, she had 400 followers on Instagram. She’s now at 2.2 million. And just posed with Lady Gaga.

As for Lee Jung-Jae and Jung Ho-yeon winning Best Actor and Actress in a Drama Series last night, while nominated alongside veteran western artists, it was unpredictable, for sure, but as seemingly improbable as it once might have been, Netflix f-cking went for it. For months I’ve been reporting on the resources that Netflix has been putting behind Squid Game during award season. They had the cast in LA for several weeks attending multiple award season campaign events. As you can see from last night, they made sure Squid Game had a presence equal to the other big series contenders. And, frankly, to their credit, this is not a one-off investment.

Netflix for years has been heavily investing in East Asian content and they have seen so much success with South Korean creatives. Much of Netflix’s growth has been in markets outside of North America, and their Korean library has been a significant source of subscribership. What makes Squid Game especially encouraging is that its critical and commercial success can be seen as a shift in the nucleus of prestige entertainment.

Great films and television shows don’t have to come from the west. Squid Game is a Netflix original series co-produced with a Korean production company and filmed in Korea with much of the creative decisions made by the Korean creatives – and now one of the industry’s towering models for success. This was showrunner Hwang Dong-hyuk’s story, and he always intended for it to be called Squid Game, which Korean audiences would understand immediately. Netflix initially worried though that the title would be inaccessible to non-Koreans, and pushed back, suggesting that the series be titled “Round Six” instead. But Hwang insisted…and he was right. Squid Game is a GREAT title for a television series. It was not inaccessible. In fact, it may have triggered even more curiosity because of its uniqueness to non-Koreans. And look, it became a smash hit, an historic smash hit.

This is why almost every other streaming platform is now rushing to expand its Asian library. What will be interesting though is whether or not they can resist interfering. It’s not about imposing “what works in the west” to the East. Rather it’s about truly appreciating how stories are shaped, and trusting that what is specific is also universal.

So has Team Squid Game gone to bed yet or are they still partying? I feel like Lee Jung-jae might still be partying. Prior to winning his SAG Award, he signed with CAA so he’s going to be taking even more meetings now that he has that trophy. He was in Gucci last night.

Jung Ho-yeon wore custom Louis Vuitton, with a ribbon in her hair made from the same material as the dress, inspired by the traditional Korean daenggi that’s used for braids.

And finally… look how excited Sandra Oh and Greta Lee were about the Squid Game wins:

At the commercial break, Sandra Oh runs over to the â€˜Squid Gameâ€™ table to congratulate Jung Ho-Yeon and Lee Jung-Jae on their #SAGAwards victories. pic.twitter.com/8QtQUzJCG4 The Euphoria Twitter Sideshow: “All My Life, My Heart Has Yearned for a Thing I Cannot Name” 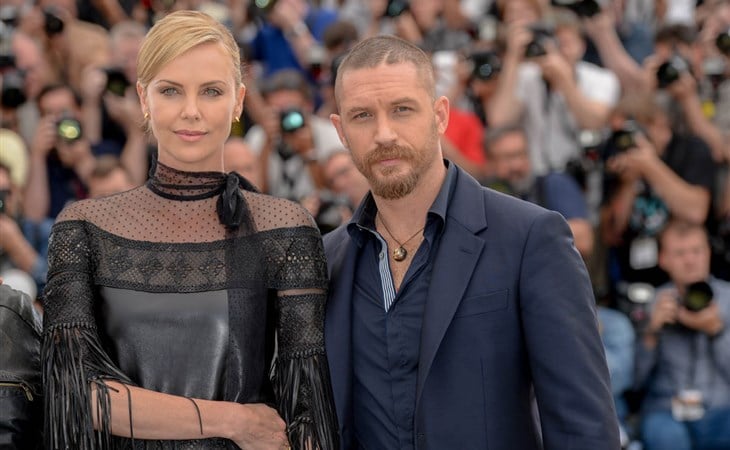