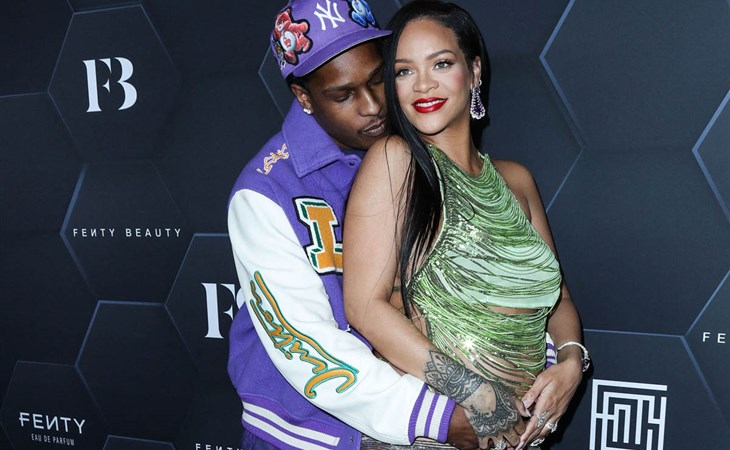 When I posted about Rihanna last week, after she was seen in LA like every other celebrity ahead of Super Bowl weekend, I mentioned that I was looking forward to the outfits she had planned over the weekend. And there were indeed some outfits.

Rihanna took advantage of the buzz in Hollywood this week to promote all of her lifestyle brands – Fenty Beauty, Fenty Skin, and Savage x Fenty. Rihanna’s promotional style has always been pretty hands-on; she’s been known to get right in there in the makeup chair and do applications for her fans. She’s picked out clothing for her fans at pop-ups for her various collections. And this weekend she attended multiple events with fans and press in attendance, including a surprise appearance at the Savage x Fenty store, speaking on-the-record for the first time since confirming her pregnancy exactly two weeks ago.

In an interview with E! News, Rihanna talked about hiding her pregnancy from her friends:

"It was harder for me to keep it from my posse, because they're around me, they know my habits," she said. "They're like, 'You don't want something to drink? You're not smoking?' And I'm eating all the things I'm not used to eating. They know I hate sweets and I'm all of a sudden asking for cookies and donuts. But finally, I just had to let it all out, and they were all shocked, of course, as the world was shocked as well."

Rocky was with Rihanna for her appearances and they were coordinated the whole time. As you can see, RiRi’s pregnancy steeze is still steeze – a shredded top and pants to go with Rocky’s varsity jacket (which was apparently unintentional) and a red leather belted coat with his grey suit and red and white kicks for dinner at Giorgio Baldi, as usual.

She and Rocky were also at the Super Bowl as she made it very clear through her clothes which team she was cheering for. While she may eating more sweets now than ever, what hasn’t changed is that she’s a late eater. RiRi has dinner when most of us are getting ready for bed, or already asleep.