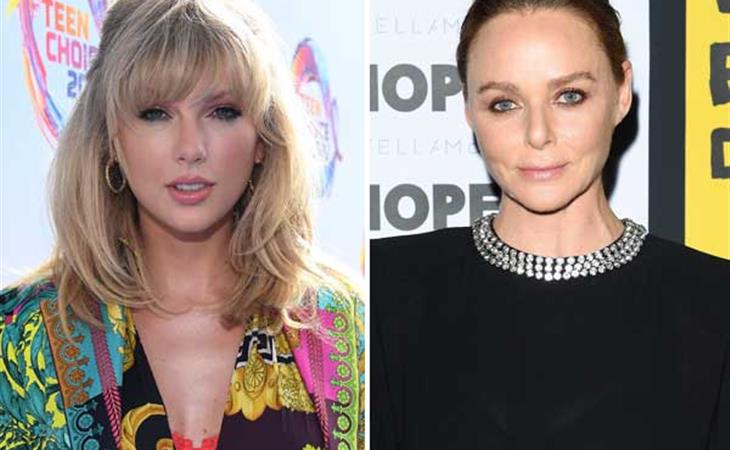 Taylor Swift performed in Central Park this morning on Good Morning America. Lainey will be posting about that soon. Here we focus on her collaboration with Stella McCartney.

There comes a time in a very famous woman’s life when she escapes LA (or New York) for a life in the UK, where she will swap out kombucha for hot tea and start dropping “rubbish” into casual conversation. She will also invariably make friends with Stella McCartney. Taylor Swift is currently living her London years, and with that comes a new fashion collaboration, Stella x TaylorSwift.

If we look at it from a fashion play, it’s a smart move to partner with Stella McCartney. She has a well-regarded brand built on a beloved last name and sustainable ethos, she has partnered with Adidas and the Gap, and it’s an insulated spot for Taylor to be in. Fashion outlets, outside of a few select journalists, typically struggle with offering any substantive criticism out of fear of being blacklisted from shows or left out of ad buys, and few would ever snark on Stella. (Sidebar: it’s interesting that fashion people have a reputation for being snobby elitists while traditionally, fashion media is pretty toothless.)

The immediate reaction is to the price point for the first two pieces: the bomber ($1995 US) and the handbag ($795 US). The defence (which will come immediately in the form of angry emails) will point to Rihanna’s Fenty line, or Selena Gomez for Coach. Here is what differentiates these examples: they are creating pieces that are meant to live for a long time. They are not self-referential or tied to promotion – the Coach purses don’t have “Selena!” written across them and Fenty is a luxury house, not a vanity project. Stella x TaylorSwift is effectively tour merch. It’s concert tees with a list of songs. It’s Taylor’s cat.

Spending $2,000 on a piece of clothing (or a bag) is not shocking for a certain demographic of consumer. But do those people want to have Stella x Taylor on their back? Or do they want Gucci, Balmain, Balenciaga, Supreme?

But this isn’t for clout chasers, it’s for the fans! OK, so can her fans, many of whom are on the younger side, afford these pieces? There are sweatshirts and t-shirts and hats, which could certainly come in at a different price points. If that is the case, why lead with the expensive pieces? It’s a curious strategy.

The drop is leaning towards exclusive too: there’ll be a limited release online with select pieces at a pop-up shop in New York, The Lover Experience. (In the year 2019, we are still doing pop-up shops? OK.) Again, who is this for? Aspiration is not necessarily a bad thing, but aspiration presented as fan service, as “I made this for all of you and it costs thousands of dollars and only people who make it into my pop-up can access it” feels very off-brand for her because aspiration is striving which seems in opposition to her message about just being “ME!”

Some pieces have lyrics, like “there’s a dazzling haze,” to go with Lover’s vibe. Taylor is, without a doubt, one of the most talented and successful songwriters of her generation. But right now, her connection to the songs isn’t quite shared with the masses because the album hasn’t been heard in full by everyone. So while “there’s a dazzling haze” might one day be an iconic line we all sing together at the top of our lungs, right now it isn’t. Lyrics that invoke an immediate swell of emotion (like “hit me baby one more time” or “I got hot sauce in my bag” or “I want to dance with somebody” or “I just took a DNA test, turns out I'm 100% that bitch”) are often a collective experience. Lover will be a smash, as her albums always are, but the experience of being a Taylor Swift fan is not a collective one.

In terms of style, the look is a lot of hearts, unicorns, clouds, tie-dye and swirliness (to go with the Swiftiness). There’s a flaming heart, which looks like Ed Hardy meets Barbie. We are coming out of summer and tie-dye was a big trend (it comes back every few years) that is feeling slightly played out. On a t-shirt, it’s fine. A t-shirt can be worn anytime of the year, in many different circumstances. This bomber on the other hand – who is wearing this in the fall? Picture this: it’s late October, the weather is foggy, there’s Halloween candy at every grocery store. You are out for dinner and your friend rolls in wearing this jacket. What’s the table’s reaction? Be honest. What this clothing line comes down to is: who really, really wants to wear Taylor’s heart on their sleeve? And how much are they willing to pay for it? 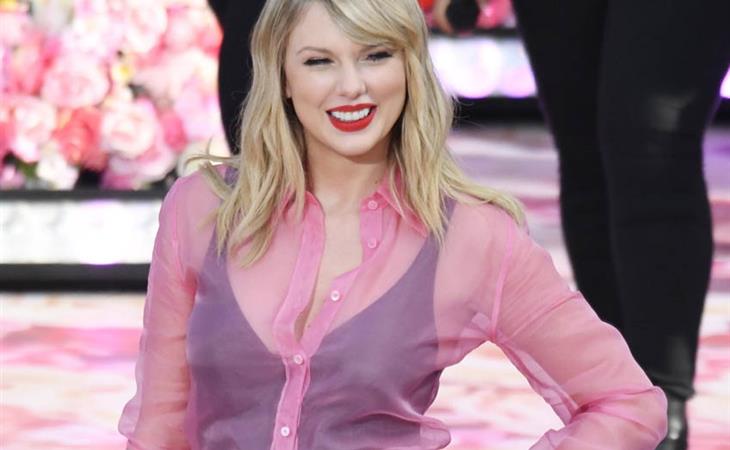