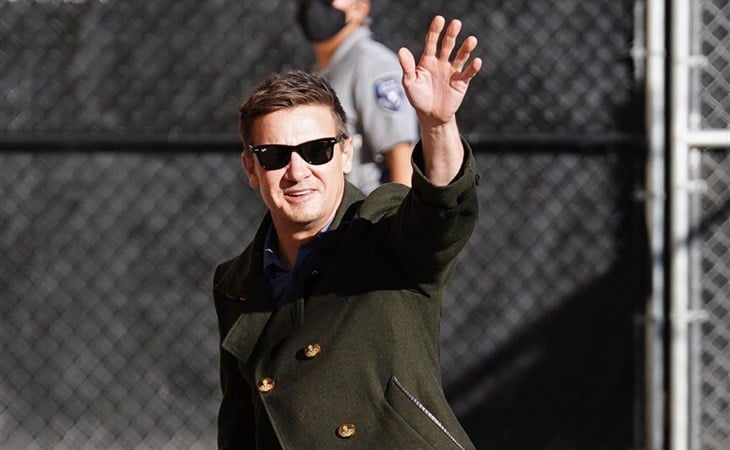 Jeremy Renner always knows just when the world needs him, whether it’s bringing us mediocre dad rock during a pandemic, or revolutionizing social media with the Jeremy Renner app. Now, however, Jeremy Renner is bringing us something I almost forgot he had in his repertoire—decent acting. He has two television projects coming in November, the family/crime drama Mayor of Kingstown, and the one everyone will actually watch, Hawkeye on Disney+. To promote both shows, Renner appeared on Jimmy Kimmel Live. This interview sort of made me nostalgic for the Renner of the 2000s.

Renner had a real weird decade in the 2010s, which started with the Avengers and him trying to become the next A-list action star, then retreating into independent, character-driven dramas when that didn’t work out. Then there was the super ugly divorce and ensuing custody battle with Sonny Pacheco, and lastly whatever the hell that app nonsense was and the side career as a dad rocker. If you’re gauging in terms of celebrity and career, I wouldn’t say it was a productive decade for Renner, who launched out of the 2000s as one of the “next big things”, known for his combination of on-screen ferocity and a puckish attitude off set. The Hurt Locker was his breakthrough, The Town showed his promise to mainstream audiences, but then it all sort of slid sideways. The decade wasn’t a total loss, he got back-to-back Oscar nominations in 2010 and 2011, but he never really delivered on the expectations of the late 2000s.

Until now, maybe? Mayor of Kingstown is absolutely going to be overshadowed by Hawkeye, which launches just ten days after Kingstown, but it looks like the kind of tense, morally compromised dramas that made Renner’s name back in the day. And, of course, Hawkeye is the chance for him to be the Clint Barton we always wanted to see, the funny, walking-disaster one from the comics. And this interview with Kimmel, in which Renner dismisses concerns about Kingstown’s title sounding like Mare of Easttown with a sardonic, expletive-laden wave, is a flashback to the almost anti-celebrity approach Renner had to publicity in the 2000s. He was caught somewhere between the too-cool-for-school Gen X icons and the muppet-haired matinee idols popularized just after the millennium, and he seemed to have a lot of fun in that space.

Of course, now it is hard to dismiss the years of unflattering stories, ranging from the silly to the genuinely disturbing, and just enjoy a flashback to old school Jeremy Renner. At one point, he was poised to be counted as one of the great actors of his generation. The talent never really went away, but everything else eclipsed it. I do sort of wonder, though, where would he be if not for the apps and family court drama and the Jeep commercials? Anyway, here’s a new trailer for Hawkeye, which looks lowkey great, even though I am still FURIOUS it took so long to get to this version of Clint.