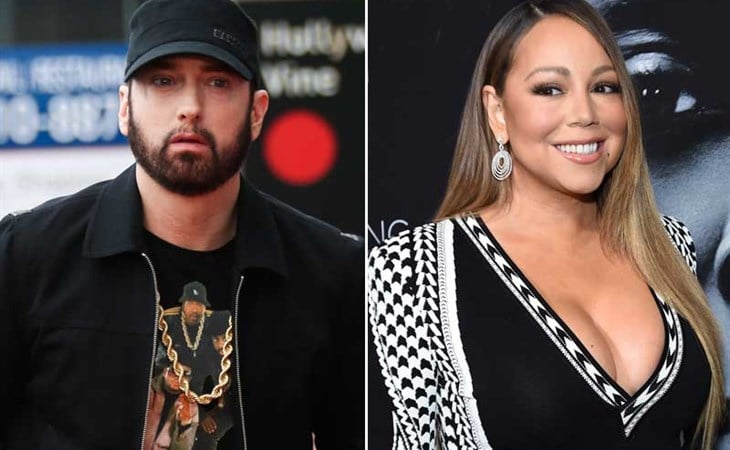 If you don’t already know, The Elusive Chanteuse is about to become The Elusive Author with the release of her memoir, The Meaning of Mariah Carey, out September 29th. This week Us Weekly published a report claiming that Eminem is prepared to be put on blast in the book, and stressed out over how far Mimi might drag him.

“Eminem’s Achilles heel has always been Mariah Carey,” says the insider. “They had a very toxic relationship.”

First of all, I really hope the book gets into this alleged toxic relationship in detail. Mariah loves to deny they were a thing, but clearly these two shared more than just a few studio sessions back in 2001, because 20 years later their relationship is still one of the untold mysteries of the music business. Eminem says they dated for 6 months, Mariah says they hung out 4 times. It’s probably somewhere in the middle, but I want her to explain. What’s the version of events you want forever on record? Eminem is apparently ready for it.

“He knows that Mariah is going to say very negative things about him. He is expecting the onslaught, and almost welcomes it.”

After all, he’s no stranger to controversy after building a career on it. However, the same source says there’s one thing he’s worried Mimi might go into.

“Marshall is stressed out that Mariah is going to say s–t that he was bad in bed or a selfish lover because he has always been very insecure about that. She knows that.”

As much as I love that juicy comment, where is Us Weekly getting this info from, Mariah Carey’s publicist? These two feuded for well over a decade, with Eminem saying some heinous things about her. I don’t think she’s been saving the revelation that he’s a terrible lay for the book. And what source close to Eminem would refer to Mariah as the rapper’s Achilles heel? His punching bag, maybe. I don’t think Eminem is scared of this book, but that’s not to say Mariah isn’t going to take aim at him. The whole marketing of this memoir is that the singer is ready to tell all.

We Mariah fans want to read about her childhood, and getting her start in the industry, and becoming a mom, but the book needs to go there when it comes to gossip. I want to hear about Tommy Mottola. I want you to tell us why you “don’t know” Jennifer Lopez. I want the story from behind the scenes of the American Idol feud with Nicki Minaj. Name all the names, Mariah.

Even with the smuttiest celebrity memoirs, there’s something about putting your dirty laundry in written form and having it published that elevates it. Mariah can talk her sh-t on the page without uttering a word and therefore remain the classy diva that’s kept her from getting into the gossip all these years. Mimi’s new slogan is going to be “the pen is mightier than the sword”.