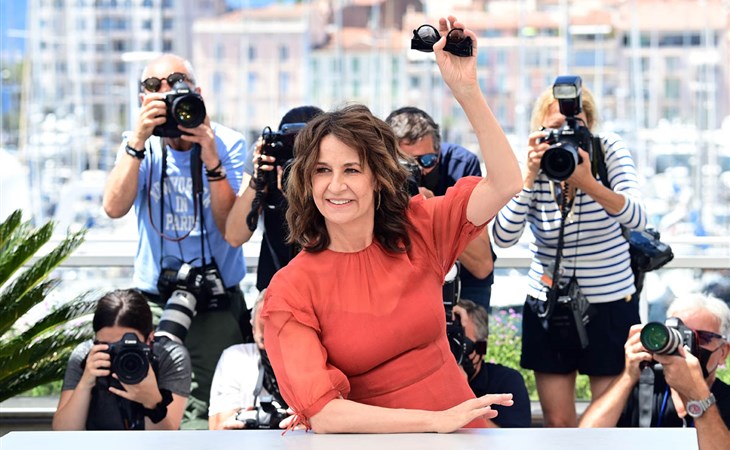 You know where we would have all been if we were in Cannes yesterday? I say this with confidence: we would have been at the screening of Aline, a film about a performer called “Aline Dieu”, based on a legend called Celine Dion, and played AT ALL AGES, including CHILD AGE, by French artist Valérie Lemercier…who is currently 57 years old, and would have been 55 or 56 years old when she was writing, directing, and shooting it.

The cast of #Aline poses together on the steps at #Cannes. pic.twitter.com/RnF7XsUCzb

Variety called Aline the “shiniest Lifetime movie to premiere at Cannes” and I’m not sure if “Lifetime movie” is intended to be some kind of shade here but for those of us who know… WHAT ELSE WOULD IT BE? What else would we have wanted it to be? Nobody is out here asking Oliver Stone to make a film “inspired” by the life of Celine Dion. And it would seem that most of the Cannes audience agreed, as Aline received a five minute standing ovation last night. This is the correct reaction:

Iâ€™ve seen the Celine Dion #Cannes2021 movie â€˜Aline,â€™ and I will never be the same. Itâ€™s like if someone made the Wendy Williams Lifetime movie â€” but in French with lip syncing. They recreate the Titanic performance at the Oscars. Magnificent camp!

Still reeling from the instantly legendary decision of 57-year-old ALINE director ValÃ©rie Lemercier to play Celine Dion at every age of her life, *including age 12*

Valérie tells Variety that Celine’s people signed off on the film. And that it wasn’t Celine who insisted on the name change but her own creative team, to allow for more creative licence. Not that there’s any doubt who this is about – but no one is blocking it in part because, well, this isn’t mockery, it’s honour. Despite the fact that so much of this is f-cking wild (if you haven’t seen the trailer, I’m about to show you but set aside some time after to look for the pieces of your brain that will have been shattered by what you’re about to enjoy), Valérie has nothing but love for Celine. And Celine, evidently, can see that Valérie is a true fan.

Aline doesn’t yet have US distribution but Valérie says that it will open in Canada two weeks after it opens in France which is November. There is nothing I want more than to see it in a theatre. Will you dream this dream with me? (It’s a very Celine question.)

Only Celine. Such is the power of Celine. That even a crazy ass facsimile can bring this much joy. Loki breaks the world, but not the MCU machine