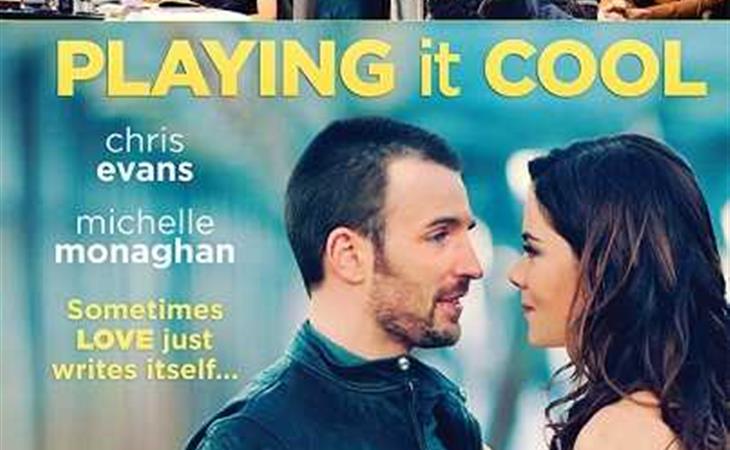 Ugh, this f*cking movie. I have uncontrollable hatred for this movie. I hate it with the fire of a thousand suns. It’s the dumbest movie I’ve seen in recent memory—yes, even dumber than Hot Tub Time Machine 2.  At least that movie knows it’s dumb. Playing It Cool is the worst kind of dumb movie—a dumb movie that thinks it’s smart. And it’s terribly written and somehow, it manages to suck the talent right out of an otherwise talented ensemble. Twee and smug, a nearly impossible combination to pull off and yet this movie is like the bacon chocolate of sh*tty twee smuggery. If I could punch this movie in the face, I would. I would punch it right in the face. And then I would kick it. If Hot Tub Time Machine 2 is a dumpster fire, then this movie is the flaming garbage inside that dumpster.

Chris Evans stars in this piece of sh*t movie because he has the worst taste in the world. Michelle Monaghan also stars in this movie because she must have done something terrible in a previous life. They play characters called only “Him” and “Her” because oh god everything about this movie is so face-punchingly SMUG. The plot is that He is a cynical asshole who doesn’t believe in love because Daddy Issues, and She is a flaky twat. He is a screenwriter who wants to write an action movie but gets hired to write a romantic comedy instead. Also, He narrates the movie. So we’re watching a romantic movie about a guy writing a romantic movie while telling us about romance. SEE WHAT THEY DID THERE? *punch*

So He and She meet and He is instantly smitten because She’s the only 10 at this party—seriously, He spends an entire scene rating women on an attractiveness scale—but She’s engaged. So He lies to Her in order to keep seeing Her, and pretends to be Her friend so that He can sleep with Her. Yes, it’s as bad as you’re thinking. This is basically Pick-Up Artist: The Movie. Oh, and He imagines himself in a variety of scenarios including South Korean soap opera and period war film, and His heart manifests as a character from a pulp detective story because f*ck you.

The cast also includes Topher Grace, Martin Starr, Luke Wilson, Aubrey Plaza, Anthony Mackie, and Philip Baker Hall. I don’t begrudge any of these people paychecks, but they are all completely squandered. No one is likeable—Mackie’s character is a despicable garbage person who I kept hoping would fall into a sinkhole—and His friends only exist to make incredibly asinine statements like “men and women can’t be just friends”. Every thought and idea contained in Playing It Cool is communicated as if it’s an earth-shattering truism, but there isn’t a single thing here that isn’t completely hackneyed and done to death. And there is a scene inexplicably set at the LA Gun Club, the point of which is a sight gag about carelessly handling firearms. Because improper gun care, that’s HILARIOUS.

Detestable characters, smug tone, twee fantasy elements combined with cynical reasoning—nothing about this movie works. The writers—Chris Shafer and Paul Vicknair, in case you feel like asking them for your money back—are so up their asses about their overly precious concept they never bother to invest Him and Her with an actual reason to fall in love beyond “attractive”. Evans and Monaghan don’t have good enough chemistry to overcome the motivation deficit so all we’re left with is a story about two enormous assholes who have to be together just to keep from inflicting their c*ntery on perfectly nice people. It’s a perfect date night movie if your goal is get your significant other to leave you.

Playing It Cool will be available on demand. You could watch it, or you could pour bleach in your eyes. Same thing, really.