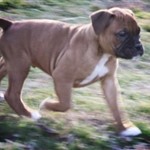 A puppy. They adopted a puppy. Some would say they adopted a starter child before they have an actual child. Or get married. Or both.

Because she already throws trucks and money and jobs and exclusivity at him, now she had to make it even more official and create a Bear Family with him. Now they all travel together -- all the bears: Mama Bear, Slum Bear, and Dog Bear... at the Jimmy Kimmel Show last night.

This is why Jennifer Garner isn’t bothered.

Dog Bear the boxer is really, really cute. Who gets Dog Bear when they break up?

“What my dog just threw up” -- I’m attaching the photo last BUT DO NOT CLICK IF YOU ARE SQUEAMISH...

Barney, our puppy, has been sick for two weeks -- throwing up, no appetite. Then... yesterday morning... Jacek sent over this photo. Can you see the “eye” on the left hand side? It’s the remains of a stuff toy. That he ATE, the f-cking idiot. And now we’re waiting to see if the rest of it will come out.

If this were to happen to Dog Bear, he’d probably have a personal assistant to clean it up.