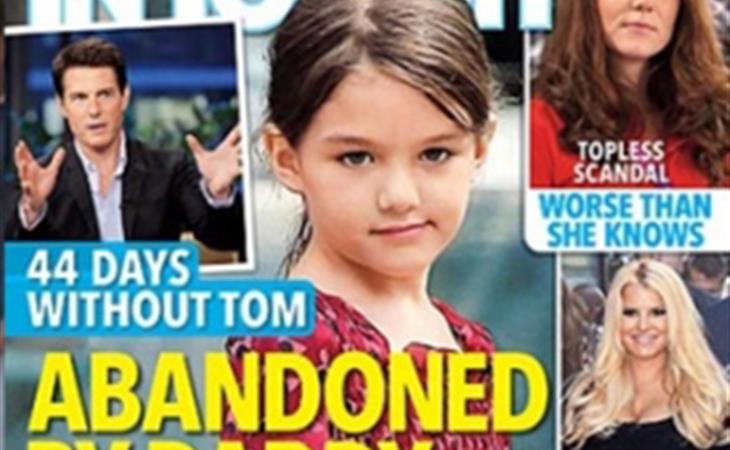 Many years ago, I wrote about the hierarchy of celebrity tabloids. In short, PEOPLE and US Weekly at the top, and the bottom feeders are Star, IN TOUCH, and Life & Style. If you’ve been reading my blog long enough, you know I rarely bother with a story that originates from the last three. It’s a waste of time. They’re too full of sh-t too often.

You get into a fight with Tom Cruise and Team Xenu will f-ck you any way they can. Reminds me of Tyler Hamilton’s book The Secret Race about doping, the Tour de France, and Lance Armstrong. When Hamilton finally admitted that he used performance enhancing drugs and provided testimony confirming that Armstrong did too, he noticed that in the months during the investigation, he was being followed, his phone seemed like it was tapped, and there were always strange cars outside his house.

Interestingly enough though, Bauer Media, for now anyway, does not appear to be intimidated by Cruise’s approach. A few years ago, given that their headline about Tom abandoning Suri etc was indeed irresponsible, and likely totally inaccurate, when Cruise was still influential and powerful, they would have probably conceded. Thanks to Katie Holmes, as you know, Cruise’s association with Scientology has weakened his position to the point where even celebrity friendly publications, like Vanity Fair, have willingly sacrificed their relationship with him in favour of Scientology slam pieces instead and mainstream news programs from Rock Centre to AC 360 have aired “Scientology is f-cked up” segments portraying Cruise’s Church as a cult run by an abusive control freak (David Miscavige) with a crush on Top Gun.

Most people now universally view Scientology with suspicion. And, by extension, Tom Cruise. That’s not to say he doesn’t have fans, but he’s also become a regular pop culture joke. His public image and popularity have taken such big hits from the couch-jumping and the divorce and the girlfriend auditioning that Bauer Media has very clearly decided that it’s worth it to take him on, banking on public mistrust of his religion and his deep ties to it (on the assumption that he chose Xenu over his wife and baby) to aggressively move ahead in defence against his claim that they’ve libelled him.

Again, my personal opinion here, on account of their publications’ sh-tty track record on reliability, is that they quite likely did. What we are discussing here however is not their journalistic integrity, but their legal strategy against a movie star that was previously believed to be untouchable.

While The Wrap has “uncovered” evidence of Bauer Media’s alleged shady and amoral dealings, The Hollywood Reporter notes that pre-trial documentation from both sides requires some explosively intriguing disclosure demands.

In having to prove that Bauer Media fabricated their story, Bauer in turn is insisting that Tom Cruise’s claim can only be supported by turning over the following:

• The extent to which Cruise was in contact with Suri following his separation and divorce from Katie Holmes.
• The expectations for Cruise's contact and visitation schedule with Suri and the terms of the divorce agreement.
• The role that Cruise's membership in the Church of Scientology played in his decisions regarding his visitation and communication with Suri.
• Suri's mental and emotional state following the separation and divorce.
• Cruise's claim and litigation history.

In other words, super, super, SUPER personal information. And information that, if released, may be detrimental to Cruise in the long run. The implication then is that if Tom wants to continue this battle, the gossip about him will never, ever stop. Admit it, we would go crazy if all this sh-t actually came out.

Which is why he might be countering their tactics with all this Nazi business. It’s Tom Cruise vs Hitler.

Classic Sh-t vs Diarrhoea. But...which is which?