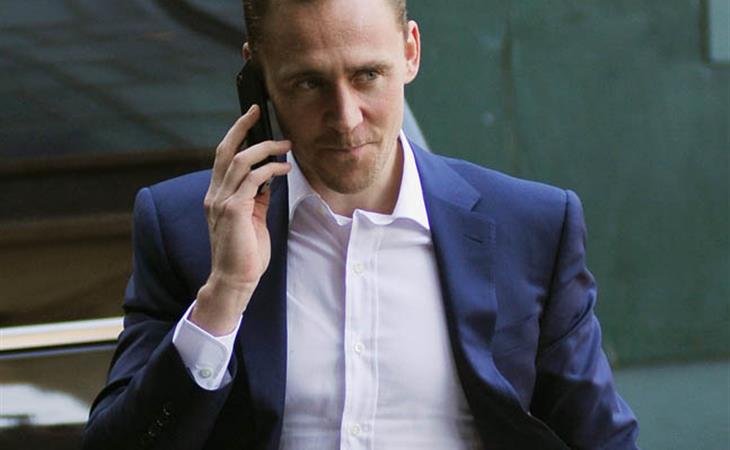 The Night Manager has already aired on the BBC and it begins its run on AMC in the US tonight, because somehow in 2016 synchronous release still isn’t the industry standard. The six-part mini-series is an adaptation of John le Carré’s novel—and the author himself has a Hitchcockian cameo in episode four—and cost co-producers BBC and AMC nearly $43 million to make. Starring Tom Hiddleston, Hugh Laurie, and Olivia Coleman, all of that money is up on the screen. This is a GORGEOUS television series, with jet-setting locales and a series of extremely well-fitted suits for Hiddleston. It’s no wonder people are suddenly calling for him to be the next Bond—he makes a damn good case for it.

The series begins in Cairo, in the Arab Spring, where Jonathan Pine (Hiddleston) is the night manager of a fancy hotel. A former soldier, he’s undisturbed by the unrest, until a beautiful woman staying in his hotel draws him into the international arms trade and the world of arms dealer Richard Roper (Laurie). After a brush with espionage that results in a gruesome murder, we jump ahead to now, and Pine is working at a remote Swiss hotel when he again encounters Roper. This time Pine goes whole-hog and immerses himself undercover in order to bring down Roper. This is a gross oversimplification of everything going on—there is a LOT packed into these six episodes.

But none of it feels rushed or crammed in. Indeed, the first episode is almost languid, taking its time establishing Pine’s world in Cairo and his repressed flirtations with Sophie, whose murder sets Pine on his later dangerous course of action. We don’t even meet Roper until two-thirds of the way through the episode—though he is seen in video footage, giving a speech—but when he shows up you can feel the momentum gathering. Laurie and Hiddleston have great chemistry together, and the give and take of their scenes is a delight to watch. They’re like the posh British version of Raylan Givens and Boyd Crowder, which is the highest compliment I can give.

The entire cast is really fantastic, particularly Tom Hollander as Roper’s right-hand man, and most especially Olivia Colman as Angela Burr, the dogged intelligence operative determined to catch Roper at any cost. Colman is so good at playing determined investigators (see also: Broadchurch) that Burr doesn’t even require a motive beyond “played by Olivia Colman”, but she gets a late monologue revealing the source of her crusade against Roper that is absolutely crushing. Colman is masterful at combining a stalwart sense of English “carry-on-ness” and devastating emotions (see also: Tyrannosaur), and she knocks her moment out of the park. The only false note is Elizabeth Debicki as Roper’s arm candy, Jed. She just doesn’t have enough to do and can feel like an energy drain in scenes where everyone else is way more interesting.

All six episodes are directed by Susanne Bier—totally redeeming herself after the catastrophe of Serena— and are also written by David Farr (Hanna). The single-author status on the writing and directing side of things gives The Night Manager a consistent cinematic identity you don’t usually get with TV. The downside is that the mistakes tend to repeat—there’s a pacing problem from the first episode that never really gets solved—but this world is so well realized that even when you do begin to notice the flaws, they’re easy to overlook in favor of the characters and spy plot.

In the wake of the Panama Papers the spy stuff feels even more cogent, as Roper seems like the kind of shady dude who would be all over dubious international tax-dodge shell companies. It also drives home that compromising morality for business can have disastrous results for people on the ground, and Farr and Bier touch on current events like the Syrian refugee crisis to tie the series’ themes to actual consequences in our world. It’s by no means preachy or even really pondering, but these kinds of touches give The Night Manager some welcome depth.

It all comes back around to Hiddleston and Laurie, though. As Roper, Laurie is a chilling villain. He plays Roper as a chess master whose cruelty lives just under the charming surface, and he makes a good foil for resourceful Pine. Hiddleston, meanwhile, hits a high water mark with his performance. He nails the combination of obsequious hospitality worker and laser-focused soldier, and brings a righteous fury to Pine’s sense of morality. Pine is driven by a thirst for revenge of Biblical proportions, and Hiddleston digs deep into Pine, showing layers of disillusionment, duty, love, fear, and determination driving Pine.

The Night Manager isn’t perfect—it has a tendency to wander—but it’s pretty close. It looks great, the acting is top-notch, and the spy story gets a boost thanks to timely real-world events. Fans of le Carré and espionage thrillers will enjoy the tradecraft, and fans of Hiddleston and Laurie ought to be ecstatic. It could probably be trimmed down to four episodes to be even more propulsive, but the extra time it affords its characters pays off with interesting interactions and character beats. And it’s really saying something that not even Olivia Colman on her A game can derail the performances of Hiddleston and Laurie. Watching those two cat-and-mouse each other through a succession of exotic locales is the chief draw of The Night Manager.