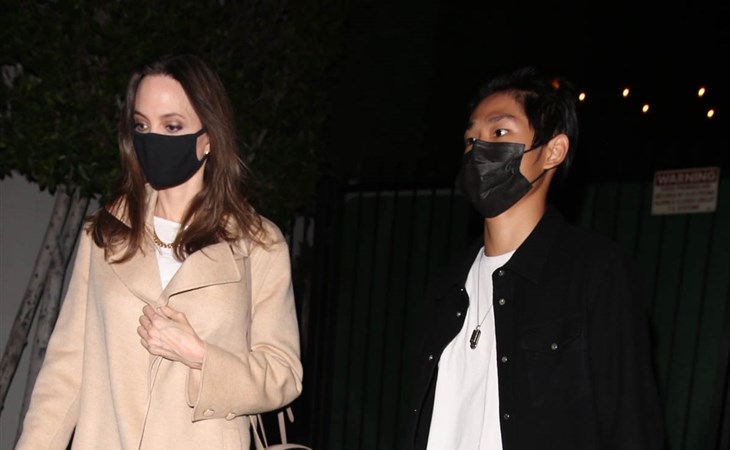 Angelina Jolie was photographed last night leaving Nobu in West Hollywood after having dinner with Pax. Nothing unusual here. As we’ve seen, Angelina spends time with several of her kids, as we saw recently when she was in Paris and Venice with five of her children but also often has one-on-one time with each of them. As Maddox is now 20 years old, it’s understandable that he’s joining less frequently; he building his own world independent from his family, and as the oldest was the first to leave home when he started university in South Korea.

Pax may soon be following, as he’s turning 18 in November and recently graduated high school. So that’s four of the six Jolie-Pitt kids and Zahara’s high school graduation is coming up next year too. At the same time, Vivienne and Knox are now 13 so they’re going into high school. The time! Where does it go?! Seriously, to me it feels like it was just three or four years ago when the twins were born and on the cover of PEOPLE.

In other Angelina news, now that we’ve seen that early promotion for Marvel’s Eternals has started with Gemma Chan covering the September issue of British Vogue, and it’s now only two and a half months before the movie comes out, we should be getting more Angelina activity after Labour Day. While Angelina obviously does press all the time for her projects, there are regular press tours, and there are Marvel press tours. I’m so curious to see what her participation will look like.