Beyoncé became the first black woman to headline Coachella in the festival’s 19-year history on Saturday. Standing on a stage that has essentially told black female artists for two decades that they are not worthy – or at least not as worthy as their peers— Beyoncé delivered the boldest, blackest, most-badass declaration of her worth and of the worth of black women. It’s not that Beyoncé still needs to prove her worth. She doesn’t. She shouldn’t. Beychella was a spectacular display of talent that no other artist, regardless of race or gender, could even fathom competing with but it’s significant that she delivered this performance in that space. Beyoncé DID THAT with purpose.

“Thank you, Coachella, for allowing me to be the first Black woman to headline. Ain’t that ‘bout a bitch?”

That was Beyoncé Giselle Knowles-Carter telling us that she knew exactly where she was and what it meant for her to do what she did on that stage. Beyoncé gave the blackest performance, complete with an epic celebration of HBCUs, in the whitest space. With the above line, she looked out to a sea of mostly white faces and spoke directly to the bullsh-t often bestowed on black women. She politely thanked the festival for her headlining spot and then promptly shaded them into oblivion, calling them out for how ludicrous it is that she is the first.

Beyoncé took on the responsibility of being the first in a way that only Beyoncé could: by honouring those who came before her while giving a performance that will inspire generations to come. To quote writer and playwright, Amanda Parris:

The greatest living entertainer is a Black woman named Beyonce. This is not up for debate.#Beychella

I would even go so far as to drop “living” from that description. Beyoncé is the GOAT. Period. Who else could sing and dance LIKE THAT for TWO HOURS without barely losing her breath? Who else could create a viral moment of appointment streaming at 2 AM? Who else could steep so much symbolism and themes worthy of think-pieces on think-pieces into one performance? The answer is NO ONE. Not a single damn one.

It wouldn’t be a Beyoncé performance without allegories, homages and imagery that we will be dissecting for decades. There were overt tributes like her *FIRE* Nefertiti-inspired opening look and the Greek letters of the “HBeyCU” sorority I will gladly pledge my life to. And there were references we’ve heard before. Malcolm X’s “Who Taught You to Hate Yourself” speech was a moment in Lemonade that cemented Beyoncé’s most blatant black feminist declaration that I singled out when I first wrote about the visual album.

Malcolm’s words have not lost their impact, especially not when they are coupled with the point Beychella was making. When the snippet of Chimamanda Ngozi Adichie’s We Should All Be Feminists in ***Flawless dropped, it was like I was hearing it for the first time.

How much more are these sentiments drilled into black girls? There is no shrinking when Beyoncé is around. Beychella gave us whole new levels of excellence and success to aspire to. Those two hours were the fruit of Beyoncé’s ambition. Beychella was steeped in black pride. It was Beyoncé one-upping her own success. It was Beyoncé boldly saying that you can be a mother, a woman deep into her career and a woman in your thirties and still reach your professional PEAK, keep peaking, in fact.

Beyoncé celebrated her own excellence but also the excellence of the black women who have surrounded her for her entire career. Lainey ruined the Destiny’s Child reunion for me right before show time which ended up being a good thing because my man and my dog were sleeping in the other room and since I knew it was coming, I was able to muffle my screams. I did not show the same restraint when Solange showed up for Get Me Bodied. Damn, did we know Solange had all that in her? Black women can do anything, y’all. Beychella is proof.

I haven’t even gotten to the musical references. I was already crying by the time Nina Simone’s Lilac Wine kicked in but it broke me. By then I was on my living room floor. Beychella incorporated the music of SO MANY influential black artists. The deep cuts include Nigerian Afrobeat legend Fela Kuti, Atlanta rapper Pastor Tony, 90s hip-hop collective Crucial Conflict, Fast Life Yungstaz (sorry F.L.Y but the only Swag Surfin we recognize now is Beyoncé’s), Everybody Mad rapper OT Genasis, dancehall pioneer Sister Nancy and OG reggae singer Dawn Penn. LET’S NOT FORGET THE JUVENILE CLASSIC BACK THAT AZZ UP. Whew. Beyoncé is a student of the culture and she showed her f-cking work.

All of the above moments were GREAT but it was Lift Every Voice And Sing, a song so synonymous with black American church culture that it has been dubbed the Black National Anthem, that had people rightly losing their minds. Ira Madison III called it “a call to arms.” Beyoncé sang Lift Every Voice And Sing at a festival known as the home of rich, blonde Instagram influencers and Leonardo DiCaprio’s bad dance moves. She DID THAT.

With that song, Beyoncé made it clear that Beychella was for Black America. Blackness is not one thing. Beyoncé’s blackness is specific. It is an unapologetic African American blackness. It is the blackness of a girl who was born and raised in Houston, Texas. When we say that something is SO BLACK, given that black people are diverse and multi-dimensional, that might not make sense. The question might be, well, isn’t Beyoncé’s performance going to be black just by the sole fact that she is black? Yes. But aside from showcasing an abundance of black dancers (representing an array of body diversity that hit me right in my feelings) and musicians, Beychella was a celebration of Historically Black Colleges and Universities. She went back to school while giving us an education. Even the black and gold colour scheme was a reference to Alpha Pi Alpha, the first African-American Greek-letter fraternity. Beychella was the Drumline sequel we deserved. Of course, HBCUs were created as educational spaces for black Americans during segregation when they were not allowed to enroll anywhere else. Now, they’re still safe spaces for black youth in a country where there are so few.

Beychella was for the black Americans who live in a country where they can’t even hang out in coffee shops without leaving in handcuffs. Even though Beychella was specific and I don’t want to dilute that, it also felt like it was for all of us who navigate boardrooms or classrooms or restaurants with faces who predominately don’t look like our own. Beyoncé – while she was singing to a crowd who seemed like they barely knew her lyrics – just told us to say, f-ck it, take a deep breath and slay anyway.

Some will say it was just a performance. Well, it didn’t feel like just a performance for me or for the countless number of black women watching who felt seen and spoken to. If Lemonade was an ode to black feminism, pain and empowerment, Beychella feels like a liberation – like a joyful, outstanding, mind-blowing liberation.

LET’S DO IT AGAIN NEXT WEEKEND. I’M READY. 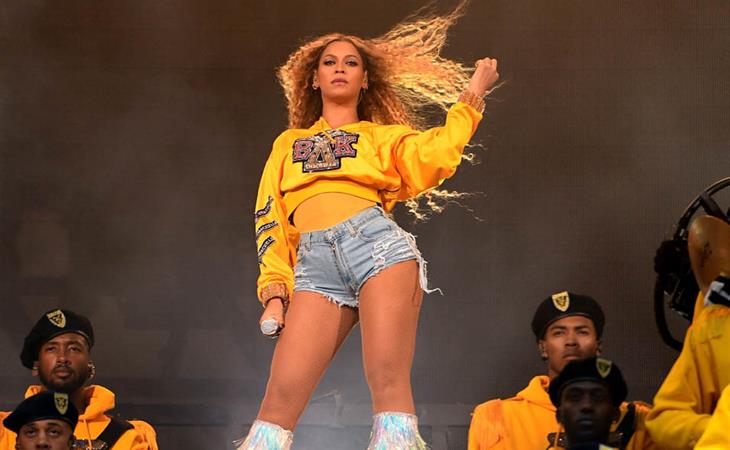