The White Lotus and the Vacation Complication

I think I just found a new show to look forward to.

I didn’t mean to do it. But thanks to social media, I found out Jennifer Coolidge was going to be wearing one of my favorite Southern California handmades on this show, and that got me curious (full disclosure, the designer is a friend of a friend). I knew NOTHING about The White Lotus but a part of me got excited about the possibility of Jennifer Coolidge and I rocking the same caftans. While none of my caftans show up in the first episode, the writing and the cast (which includes Natasha Rothwell, Connie Britton and Steve Zahn) are getting me excited about a new weekly watch.

This limited series is a mix of mystery, cringe, anxiety, and dark humor that takes place at a Maui resort called The White Lotus where white and wealthy people go to “escape” the stress of their “regular” lives.

Since I don’t know when I will travel again, please indulge me in a little trip down Maui memory lane. I’ve been there twice with my husband and kids: once when he convinced me to celebrate our tenth wedding anniversary and not travel with my laptop when I was ABD (All But Dissertation), and the second was after completing my first year as a tenure-track professor. When I think of Maui, I think of some of my children’s first vivid family vacation memories, of eating and falling in love with banana bread for the first time (it weirded me out for some reason before then), and of attempting the road to Hana with one kid still in diapers. On our second time in Maui, the first stop after the car rental place was Sheldon Simeon’s Tin Roof, where we bought a sublime meal in spite of eating it in a Costco parking lot before buying groceries for the week. It is in Maui where I went on early walks with The Carters’ Everything is Love as my soundtrack; the song “Summer” still gives me flashbacks of buying fruit spreads from the farmers market or spam musubi from the nearest grocery store. I’d arrive back from these walks to the condo to catch my husband watching World Cup soccer matches as he made eggs and bacon before the kids were even awake. The view from that condo’s lanai is still the wallpaper on my tablet, and a photo of my kids embracing at a popular restaurant is still the wallpaper on my phone. A big canvas print of another Maui landmark is hanging in my living room. It’s been years since either trip, but what I associate with Hawaii is celebration, relaxation (something I am not great at), family fun, and amazing food.

The White Lotus is not meant to make you feel any of these things. And that is the point.

The show (so far) tackles the life anxieties and tensions of its characters, who are all going through moments of crisis or transition that are made obvious while on vacation. Ironically, despite taking a break from life in Maui, these people cannot escape their conflicts as much as they try. It is as if Maui is too beautiful to hide that a newlywed couple should not be together; the fear of a possible cancer diagnosis (and the nonchalance of a long-term partner about it); or a woman’s grief for her mother’s death (even if their relationship was complicated). And while it’s still early, I imagine that the differences in terms of race and class between two college friends, who must have felt they had much more in common in the campus context, will probably come to the surface in spite of the beauty of the island, any resort amenity or lobster bake.

I knew from the first glimpse of the resort staff that this show would break the fantasy of vacations, and not just from the guest side - and this is the component of the show that I find most intriguing. We are confronting the work behind the relaxing vacations that only some of us can afford. I don’t want to spoil yet why new employee Lani might be one of my favorite characters or why her story from the get-go gets at the realities of the people who make tourism possible, but when Armond, the manager of the resort, is coaching her to wave to the boat of VIP guests like she “means it,” and that her goal is to not be “too specific as a presence” so that she and the others “can disappear...as pleasant interchangeable helpers” to the VIPs, I can't help but think of the tourism realities of Maui right now. Many tourists seem to think that travel destinations and their locals merely exist to make other people’s vacation dreams possible, pandemic be damned. Quick PSA while we are at it--if you are traveling anywhere right now, DON’T BE AN ASSHOLE.

Money and class are at the core of many character dynamics at The White Lotus. The newlyweds, Shane and Rachel, got married quickly and it’s hard not to read Rachel’s discomfort with her new identity as “Mrs. Patton” as regret, especially in light of the show’s opening scene. In the first episode, she is often uncomfortable at Shane’s insistence to complain about their suite, annoyed that her new husband will stop at nothing to get what he thinks he deserves. She wears two clashing prints to cover up her swimsuit at the pool, and the awkwardness of the outfit corresponds to the awkwardness of her interaction with Olivia and Paula, who feel more at ease at the extravagant resort. Her clothes and demeanor give a glimpse at her anxieties as a 30-something woman who thought she should have accomplished a lot more by now. Instead, she feels she is there as Shane’s tagalong instead of a partner, and that cannot be an easy way to start a marriage.

Another dynamic with strong class (and racial) undertones is the one between Tanya and Belinda (Jennifer Coolidge and Natasha Rothwell, respectively). I was delighted to see Natasha Rothwell’s name in the opening credits, even with no trace of her hilarious Kelly from Insecure. She’s calming and lovely in her role as Belinda the spa manager. Jennifer Coolidge delivers every single one of Tanya’s lines with comedic mastery and her pairing with Rothwell makes me so happy. But it’s hard not to be uncomfortable when watching their interactions - Tanya insists that her massage cannot wait, and when Belinda offers her a consultation and “cathartic” craniosacral massage, Belinda calls attention to her generous gratuity and insists to the resort manager that he book her another appointment with poor Belinda. After her experience with her, Tanya seems to become infatuated with Belinda, desperately wanting to repeat the catharsis. While one feels for Tanya’s loss of her mother, it’s hard not to see how Tanya’s healing could potentially come at the expense of Belinda’s comfort.

The tensions about money/class and gender are also apparent with the Mossbacher party. Mother and daughter Nicole and Olivia Mossbacher are in charge of their family vacation and the men are reluctantly and bitterly along for the ride. Nicole is a big deal CFO and (primary) breadwinner (a character possibly inspired by Gwyneth Paltrow because her company is called “POOF”) who does not show enough concern for her husband’s possible testicular cancer diagnosis. Olivia gets to bring her friend on vacation and banishes her brother to a cot in the galley kitchen and constantly accuses him of “fapping”. The women seemingly emasculate these men. I cannot tell yet if this show will critique with nuance the idea that some men (and unfortunately, some women) have about how “feminism has gone too far” or if it will be in support of it.

But what I am most curious about is how Paula and Lani’s storylines will unfold. Paula is the only person of color among the VIPs and is there as Olivia’s guest. Will her experience of Maui with the help of a local make her differences with Olivia more pronounced? What will Paula and Olivia’s dynamic be by the end of this vacation? How will Lani continue to work at The White Lotus after such an “eventful” first day? Will Armond continue to expect Lani to perform a vague version of herself for the VIPs after what happens in his office during the lobster bake? Will the show explore how someone like Lani has to bounce from resort to resort and someone like Armond gets to manage one?

Finally, part of the reason this show intrigues me is that I’ve been Paula (or who I imagine Paula to be). I’ve been the friend (or girlfriend) in someone else’s family vacation. I have been to a few places my parents or close family members had never been by the time I finished college. But this show also reminded me that I was the rare Mexican guest in a Mexican resort full of Americans and Europeans many years ago. It was during my honeymoon. It felt so strange for me to visit my country of birth and feel so out of place. It felt uncomfortable to be “served” and “attended” by the only other people who looked like me. Sometimes the employees and I shared smiles or short conversations, and they’d ask me where I was from (in the U.S. and originally) and what I was doing there. They’d remember me when I’d come back to a restaurant or we’d share a laugh about something that we’d say so quickly that my husband could not understand without translation. I’ve been back to that area of Mexico a couple of more times, but I’ve not stayed in a resort since…

While the mystery of the show is about a death at The White Lotus, I am not dying to figure it out. I will be watching to cringe at the guests’ ridiculous expectations and the ways the resort staff fails (sometimes willingly) to meet them. Is it silly of me to hope that more of us will watch this mini-series and reflect on the ways we behave as travelers, and that we try our best to travel, especially in this pandemic context, without exploiting the lands we claim to love and the people who live in them? 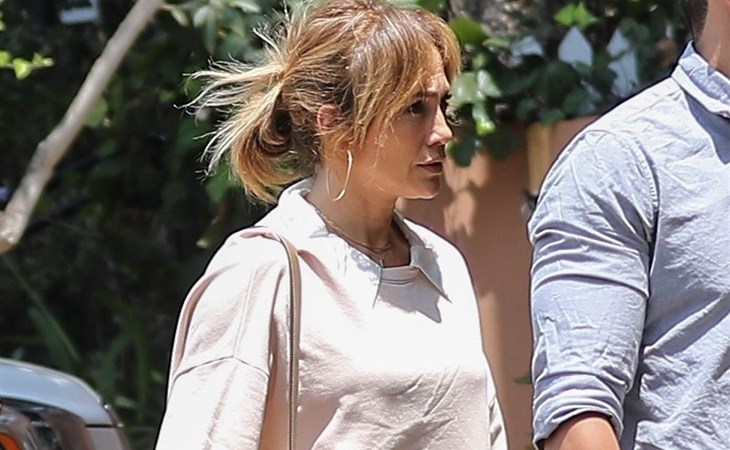 Bennifer in traffic and the sneakers

Ben Affleck and Jennifer Lopez are happy, in love, and dressed for a winter catalogue while on a Starbucks run in LA