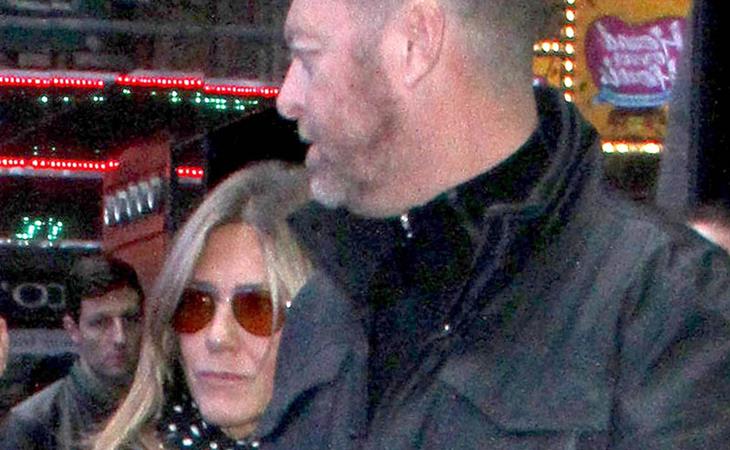 Jennifer Aniston was photographed leaving the Good Morning America studios on Monday in New York. Since then I keep expecting to see the interview, or some headline about why she was there and what she was promoting. There hasn’t been anything. The next day, Courteney Cox was photographed heading to the Springsteen show on Broadway. According to the paps, she met with Jen at some point, but they avoided being shot together.

Last month THR reported that Netflix had acquired Jen’s new movie Dumplin’, based on Julie Murphy’s book of the same name, and that the movie would be released later this year with a limited theatrical run. So far, no specific date has been confirmed and since TIFF and NYFW were happening around then, the story didn’t get all that much pickup. There is one detail that jumped out at me though…

If you’ve read the book, you know that the main character, Willowdean, loves Dolly Parton. Dolly worked on the soundtrack which will be released November 30 so, presumably, the movie will be out around then. Dolly wrote six new songs with Linda Perry for the film. And according to THR:

In addition to Sia and [Miranda] Lambert, artists involved with the original motion picture soundtrack include Alison Krauss, Elle King, Mavis Staples, and Rhonda Vincent, among others. Aniston and [Danielle] Macdonald also collaborate on tracks.

Is that like… dialogue? Or is Jennifer Aniston singing?

She was actually supposed to sing in a movie a few years ago. It was for a project called Goree Girls, remember? About a girl group formed in prison. She and her producing partner, Kristen Hahn, have been trying to make it happen since at least 2009. Back in 2016, Kristin said they’re still working on it and that they haven’t given up but had it gone forward, and should it go forward, the intention was for Jen to sing in the movie. It remains to be seen whether or not she and Kristen will be able to finally get Goree Girls into production but it sounds like she’s singing with Dolly in Dumplin’. She said as much on Ellen at the beginning of September. They were scheduled to go into the studio together. For some idea of what that might sound like, see below. Jennifer Aniston sings in time for the holidays. You into it?