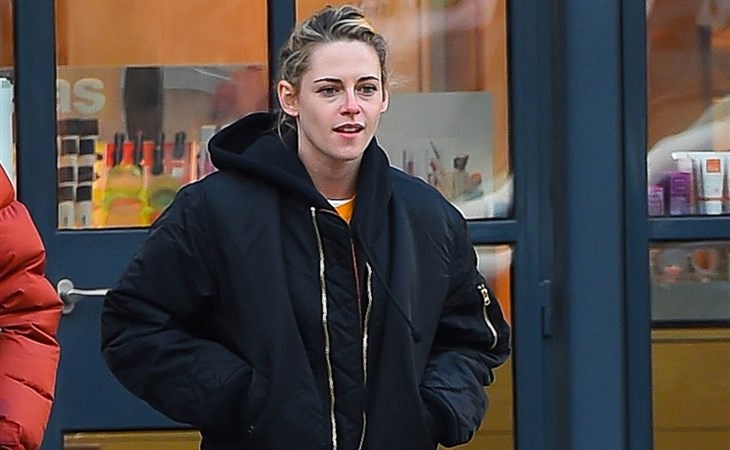 Here’s Kristen Stewart out in New York with some friends. She was there this weekend for a Spencer screening where she was joined by Oscar-winner Julianne Moore:

This isn’t the first time we’ve seen Julianne step out in support of Kristen this award season. She introduced her at the Gotham Awards a couple of months ago and is clearly among the voting members of the Oscar Academy who would be in favour of Kristen’s nomination for Best Actress. Needless to say, even though omicron has stalled some Hollywood projects and delayed events, campaigning is still happening – it’s just not as visible as it would be if we were in non-COVID times.

For Kristen I wonder if the presence of someone like Julianne is even more critical now, after the Screen Actors Guild announced their nominations and she didn’t make the cut. It is by far the biggest snub of the year and obviously the wider SAG community of actors just wasn’t feeling her. As previously noted though, the actors branch of the Academy is a smaller cohort and more likely than the SAG membership, which includes performers at every level, and not only the ones who have achieved a certain amount of success, to be more sympathetic to Kristen. At least that’s what her campaign strategists might be hoping for.

And as you can see, she’s still showing up on the circuit and for these more lower profile events. There doesn’t seem to have been a big media presence at this screening, I can’t find any official photo agency pictures other than the shot that NEON posted on social media. But a lot of times this is when a lot of the campaign work is done, campaigning that happens away from the cameras. Will it be enough to get Kristen Stewart to the Oscars?

In other Kristen news… to fashion, and her outfit for the event. Plaid velvet and loafers. I LOVE this outfit. And those loafers are amazing.