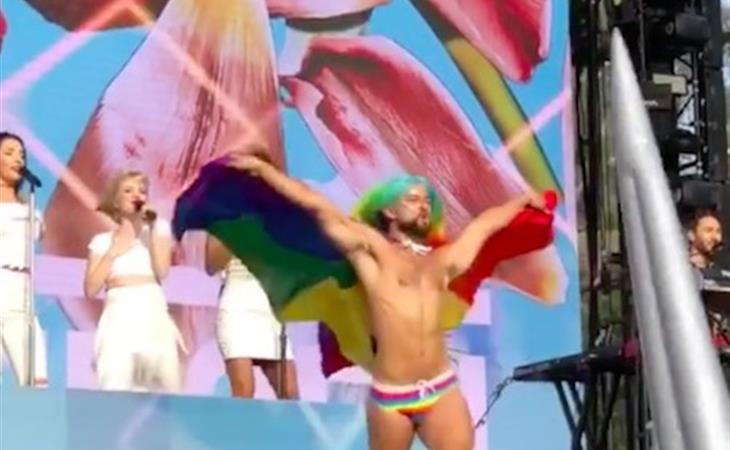 This beautifully gay performance has reminded me of one of my regrets: I do not talk about Carly Rae Jepsen enough on this site. I love her. And I love Emotion. So much. How has it already been three years since it came out? Why didn’t I shout at you more to listen to it when it did? Because I’m a f-cking asshole, that’s why. So I’m sorry. I’m sorry to you and to Carly and if it’s not too late, watch this clip and, if you don’t have it already, make Emotion your end of summer soundtrack because it will hold up this summer and every summer for a long, long, long ass time. (Dlisted)

It’s the year of royal family drama. We’ve seen it in Spain, we’re seeing it in England. And now it’s Monaco’s turn. Can you imagine if Meghan Markle married into the Monaco royal family, what levels of f-cksh-t we’d be seeing if Thomas Markle met this dude who’s suing the French government for taking away his royal claims? (Jezebel)

I really love how complicated social media makes the modern relationship. Lena Dunham and Jack Antonoff wouldn’t be the first ex-couple in the history of love to have talked about what they would name their baby if they had a baby. But now that list of names has been made public. So if you’re the next person to make a baby name list with Lena or Jack, are all the names on that old list immediately crossed off? (Just Jared)

Jennifer Garner and Ben Affleck still aren’t divorced yet and they’re taking so long, the file might get dismissed. Supposedly it’s because their priority is their children and everything else is irrelevant and besides, it’s not like they haven’t moved on in other significant ways. I don’t think this has to do with any possibility for reconciliation. I mean, Jennifer Garner can endure a lot, as we’ve seen, but he’s parading Lindsay Shookus around for a year now. Could you come back from that? (Cele|bitchy)

You know how this has been the year of quick engagements/marriages? Ariana Grande and Pete Davidson, Justin Bieber and Hailey Baldwin, Michelle Williams and Phil Elverum. There’s one more – and it happened first, and we never mention it: Emily Ratajkowski and… I don’t know his name. Is it Bear? I think it’s Bear. That’s probably why I forgot to put her on the list. Not just me. All of us! To her credit, I don’t think she’s out here waving her hand in the air trying to remind us that she started it. (Go Fug Yourself)

Remember when Barbra Streisand revealed that she’d cloned her dog and the reaction was like… WHAT? And some people laughed and some people were like, Jesus, that’s crazy? Well here’s an article about the dog cloning business that made me really, really uncomfortable because I was ignorant to the fact that so many dogs may have suffered in the process. I won’t be cloning my dogs. Instead I look for my deceased dog, Marcus, in our orchid. I swear, I swear he came back as our orchid. I talk to that orchid every day like he’s in there. (Vanity Fair)