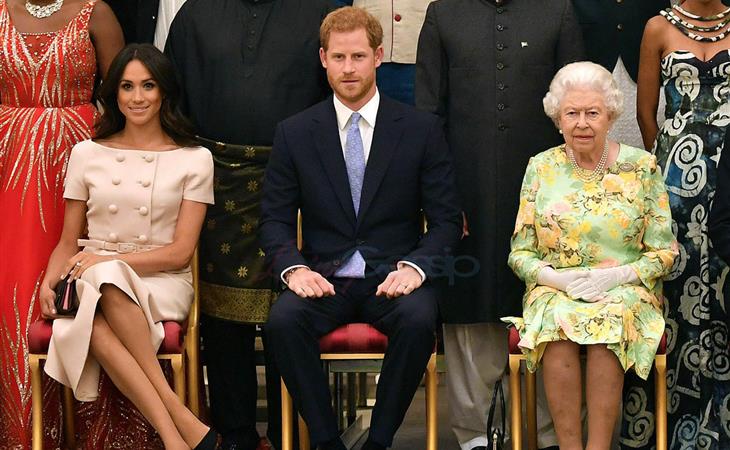 As expected, Prince Harry and Royal Meghan joined Her Majesty this afternoon at Buckingham Palace for the Queen’s Young Leader Awards recognizing the efforts of youth social advocates from around the world who’ve demonstrated leadership in their communities. This is the Queen’s final year presiding over the event. Harry and Meghan are taking over from her next year. Here they are arriving at the ceremony:

WATCH: The Queen, Sir John Major and the Duke and Duchess of Sussex (wearing @Prada) arrive for the #QueensYoungLeaders awards ceremony: pic.twitter.com/myMV3RmaaS

During Harry’s remarks, he talked about inheriting this role from his grandmother:

“I guess you can say you’re stuck with me. I, together with my wife Meghan, look forward to convening young people from around the Commonwealth to hear your ideas, work with you to build platforms for you to collaborate and form partnerships, and continue to meet with many of you as we travel around in our work on behalf of the royal family. We look forward to meeting many of you this evening — but we also hope to see you in action in your home countries someday too.”

If we want to get juvenile about it – of course we do – apparently Meghan was beaming at him from her seat when he was speaking. There will probably be more details about this tomorrow but for now, for this post, I’m here to discuss the group photo. Note how Meghan is sitting. With her legs crossed. According to old timey etiquette tight asses, as you may have heard, royal women are supposed to keep their legs together and not cross them at the knee, otherwise…what? A dozen dicks will end up in her pussy? Women’s bodies have been policed since the beginning of time and for all the archaic sh-t we’ve grandfathered out of our systems, I don’t see the justification for what this dumbassery continues to be observed.

Princess Kate, however, observes it closely. And she mostly sits with her legs pressed together, off to the side, feet crossed at the ankle, if there’s any crossing at all. It’s called the “duchess slant” and Royal Meghan has been seen doing the “duchess slant” on occasion. Today though… she crossed her legs and threw a slant into the combination. Can we call it the “duchess cross slant”? And guess what? It’s totally OK. After all, her mother-in-law did it too. It wasn’t offensive on Diana and it should not be offensive on Meghan. What is offensive though is why she still hasn’t been able to get the blending right on her makeup. That bronzer situation is still way heavy.