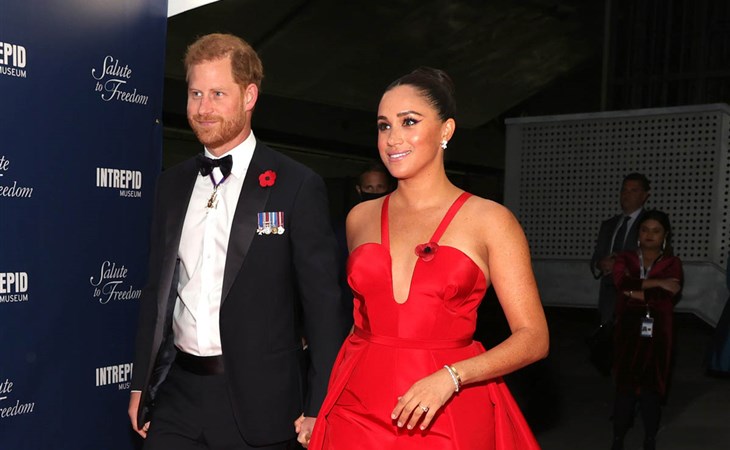 When I saw these shots of Prince Harry and Meghan Markle at the Intrepid Air & Space Museum Salute to Freedom Gala in New York on Wednesday night ahead of Remembrance Day, Veterans Day in the United States, I wondered if she was taking a page from her mother-in-law Princess Diana’s playbook. The black revenge dress, we all remember it. It’s not exactly…but the red Carolina Herrera is definitely a distraction. Harry and Meghan rarely step out in public, and even more rarely at black tie events. This was their first red carpet in over a year and on an occasion that has special significance for Harry, given he, too, is a veteran, and military service and honouring those who have served and are serving is a major priority for him.

But over and above that, they would have known that their appearance would have brought the heat, and worldwide attention – exactly as the Mail on Sunday is appealing the summary judgement in Meghan’s favour that was decided earlier this year and the sensational details coming out of the hearings. So it was a little “no, we’re not bothered”, and also a lot of “if you want sensational, look at me in this dress”.

Wearing red is how she countered the other headlines about her yesterday, most of which were about her having to “apologise” to the court for not mentioning emails she exchanged with Jason Knauf, the Sussexes’ former communications secretary, who also worked in a similar capacity, ahem, for Prince William and Kate, and who is now the chief executive of The Royal Foundation of the Duke and Duchess of Cambridge. What happened to NDAs? Never mind. Nobody wants to talk about that – but we should, later on in this post.

Not surprisingly, the UK media, and disappointingly other media outlets around the world have seized upon this one line in Meghan’s witness statement provided in response to the appeal without context. The witness statement is 21 pages long and this “apology” is preceded by a lot of other pertinent information about the sequence of events leading up to the emails provided by Jason Knauf in support of the Mail on Sunday’s claims (which in and of itself is weird… that he’s assisting a f-cking tabloid in a lawsuit against members of the royal family).

Remember, this lawsuit is about whether or not the Mail violated Meghan’s privacy by publishing parts of a letter she sent to her father, Thomas Markle. For a comprehensive breakdown of what this trial is actually about, here’s an explainer from Byline Investigates that’s worth reading. Months ago, a judge already decided that the case shouldn’t go to trial because he found that the Mail couldn’t prove that Meghan always intended for her private letter to be shared. The Mail is trying to throw everything they can at the wall to go to trial – and you can imagine one of the reasons they would want to go to trial. Because then they can get more stories out of the situation, which is also what’s happening with this appeal and the selective lifting of one passage from the 21-page witness statement about an apology, ignoring all the other information that Meghan provided to the court.

The issue here with these emails and this apology is that the Mail is contending that Harry and Meghan collaborated with the authors of Finding Freedom, which mentions the letter she wrote to her father. In the emails that Jason Knauf shares, Harry and Meghan apparently signed off on him briefing the authors on background, for accuracy. What’s not been reported widely is that the reason Meghan did not previously acknowledge these emails is that when the lawsuit was originally filed, the book hadn’t come out yet. The Mail only introduced this argument about the book last fall, after its release, so she wasn’t looking for that information during initial disclosure.

And on top of that, in light of Jason releasing his texts and emails, she has provided to the court more of her own texts and emails, and more complete texts and emails that her legal team contends prove even more that she never intended for the letter to be made public. Again, none of that has been reported, because that “apology” which has been already taken out of context, is being blasted all over the place. But it’s important to remember that the judges presiding over the appeal have a lot more information to analyse than what’s been dramatised in the media – including all the details in Meghan’s 21-page witness statement which, again, directly refutes point-by-point, with receipts, the Mail’s assertion that Jason Knauf’s correspondence makes their case.

While we wait for the legitimate legal experts to decide on whether or not the case will go trial though (and remember, the Mail is appealing the summary judgement in favour of Meghan, bypassing the need for a full trial) let’s focus on Jason Knauf and how he appears to be helping the Mail on Sunday and all of its foolery in a case about whether or not they should have published a private letter written by a member of the royal family. Does that seem above board for a royal aide, ffs?!

Like no matter what your feelings on Meghan, this is f-cked up, non?

Jason Knauf has become a witness for the Mail on Sunday, which implies that he thinks they were justified in publishing Meghan’s letter to her father? And the Mail and Jason are basing this on emails and texts from Harry and Meghan authorising him to speak to the authors of Finding Freedom on background for accuracy – which is actually part of the day-to-day job of a royal communications secretary. Their actual jobs are to work with the media to confirm or deny sh-t. Like any celebrity publicist. Per Jason, Harry apparently told him via email re: the authors of Finding Freedom that, "I totally agree that we have to be able to say we didn't have anything to do with it. Equally, you giving the right context and background to them would help get some truths out there."

I’m not sure this is a smoking gun in light of what a royal communications officer is supposed to do when media members, whether or not they’re writing a book, come to them to verify information. And as it pertains to this case in particular, even if Harry and Meghan wanted Jason to make sure that the authors of Finding Freedom were getting the details right in the book, it certainly doesn’t stretch over to “yes, that means that I give up my claim to privacy over my letter to my father”.

But … let’s say we play out that scenario. Multiple books are published about the British royal family every year. We’ll take Robert Jobson’s book about Prince Charles, Charles at Seventy, which came out November 2018, researched over 18 months while travelling on official tours with the future king. Parts of that book included less-than-flattering details about both of Charles’s sons, including the detail that “members of staff, even operators on the Palace switchboard, are aware that William can be ‘difficult’ or ‘a little grand’”. First of all, LOL, still. It was funny then and it’s still funny now – not just the quote but that Robert Jobson was able to go ahead and write that, considering that while he obviously won’t reveal his sources, he obviously had *some* access to Charles via the palace, given that he was allowed to travel with the Prince of Wales while doing his reporting. Which implies that, well, the book was endorsed.

And if it was endorsed, with the cooperation presumably of palace insiders, the equivalent of Jason Knauf at Clarence House, does that mean that the Daily Mail, should they be able to get their dirty hands on some of Charles’s private correspondence and publish it? If so…um, are you sure? Are we ready for another Tampongate?!

The job of the Jason Knaufs at the palaces is to avoid Tampongate, and not actively encourage this kind of invasion that compromises the reputation of the British royal family. And yet here we have a former royal aide and current very close associate of Prince William and Kate cooperating with a tabloid – not to mention Charles and Camilla constantly giving the Mail content in the form of exclusive columns and essays. Is anyone else wondering what the Mail might possibly have on the non-Sussex members of the British royal family?! 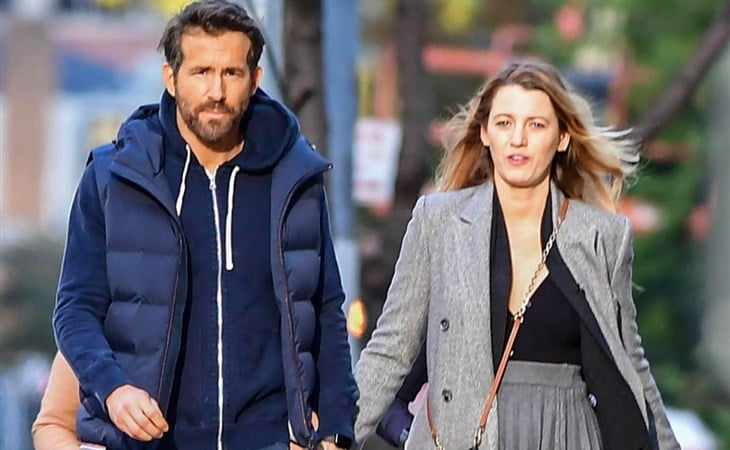 Ryan and Will swap