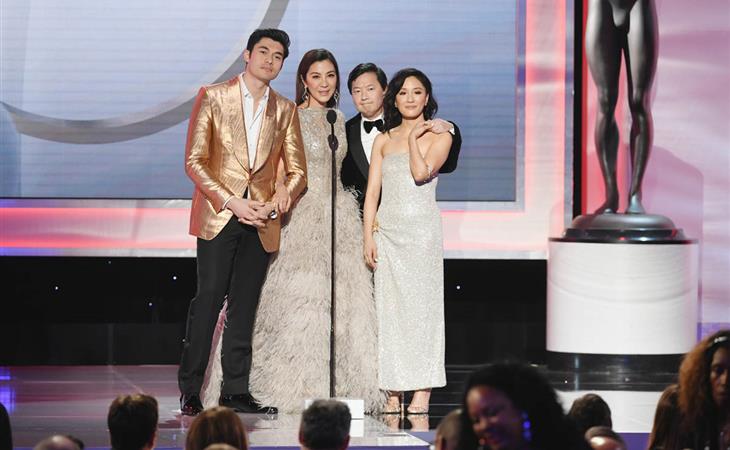 Crazy Rich Asians was not nominated for Oscar last week so the SAGs was the last awards season stop for the cast, at least until the sequel comes out. Which won’t be for a while since director Jon M Chu is working with Lin-Manual Miranda on the film adaptation of In the Heights and that doesn’t go into production until later this year. There’s no sadness here though, not when you consider everything that CRA has achieved: winning the box office several weeks in a row, further establishing Constance Wu as a leading actress, reminding everyone that Michelle Yeoh is a f-cking legend, introducing the world to hotness of Henry Golding (and all the other Asian male sexiness on display in the movie), and giving Awkwafina all the opportunities to steal every scene she’s in to the point that it seems like we can’t go a month without an Awkwafina headline about whatever new project she’s been signed to.

This was always the goal: momentum. This is what didn’t happen after The Joy Luck Club 26 years ago. As we know now, the momentum then was stalled, and not for lack of trying on the part of Asian creators in the business. It’s just that the people with the money never believed that the audience was out there. That fact is now hard to ignore. It can’t be ignored. Which is why the momentum has been sustained: just as Crazy Rich Asians ends its award season run at the SAGs, a new cycle is already being cranked into motion at Sundance.

As Sarah wrote in her Sundance preview last week, Awkwafina is the star of two projects at Sundance – one of them, The Farewell, has been acquired by A24. Previous A24 films include Moonlight, Lady Bird, Eighth Grade, First Reformed, The Killing of Sacred Deer, and so many prestige projects that have been awards season conversations. The Farewell is written and directed by Asian American filmmaker Lulu Wang based on her own experience of going back to China to spent time with her grandmother who didn’t know she had cancer, and the whole family decided not to tell her but instead plan a wedding so that she could enjoy one final celebration. If that sounds familiar it’s because you listen to This American Life and it was featured on an episode from the April 2016 episode “In Defence of Ignorance”. If you haven’t already, you should download it for your ride home. It’s a wonderful story. According to Variety, several companies were interested in The Farewell, including Amazon and Netflix, but they really want a major theatrical release for the film, just like it was with Crazy Rich Asians. These stories deserve their moment on those giant screens.

Justin Chon is also getting some buzz at Sundance two years after his film Gook won the Sundance Next Audience Award. As Sarah noted in her preview, Justin (a former Twilight cast member) is “steadily scaling up”. She predicted that the star of Ms Purple, Tiffany Chu, would be a breakout. And given the reception the film has received so far, that call is looking very promising. More on Justin and Ms Purple by Jen Yamato for the LA Times:

Returning to Sundance, director @JustinChon continues to bring stories of LA and uniquely Asian American experiences to life. Ahead of tonight’s premiere, I met Chon and star Tiffany Chu at the K-town karaoke spot where they filmed much of MS PURPLE: https://t.co/76QZBWnxPy pic.twitter.com/R5M129kOph

But the biggest sale out of Sundance so far is Late Night, directed by Nisha Ganatra, produced, written by and starring Mindy Kaling, and co-starring Emma Thompson. Amazon acquired Late Night for $13 million.

Wow: Congrats to @mindykaling and @NishaGanatra for scoring a Sundance record buy for their critically lauded “Late Night” (an Asian American directed, written and led feature film with 50:50 gender parity behind the camera)!https://t.co/MN9VFHZ3Sd

Late Night is about a talk show host (Emma) “who grudgingly takes an Indian-American writer (Kaling) under her wing after she is shamed into hiring more women and minorities.” It’s a rom-com. About work. About falling in love with the work and with the work of your colleagues. It’s about women falling in work-love with each other. So it’s diversity in production but also in narrative. And there’s more of that on the way:

The end of a season then no longer means the end of momentum. The momentum continues.

But now can we just have a quick word about Gemma Chan’s dress? It’s everything I usually hate: taffeta, mullet skirting, and baby pinkness. But none of that is a problem with this Oscar De La Renta gown, designed by Laura Kim and Fernando Garcia. (Gemma has said that she’d be showcasing Asian designers throughout award season.) It’s exquisite. And the key to making taffeta exquisite – give it dimension. Most of the time, taffeta is presented to us flat, with not all that much cutting. They cut and ruched and pleated the sh-t out of all this taffeta and the effect, especially on Gemma, is GORGEOUS. 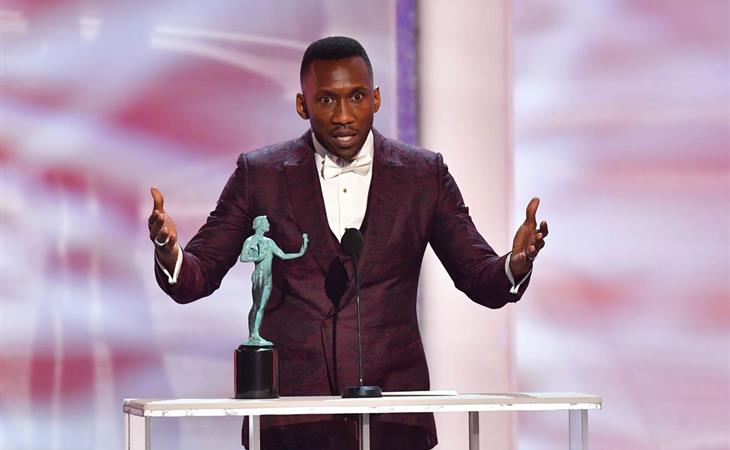 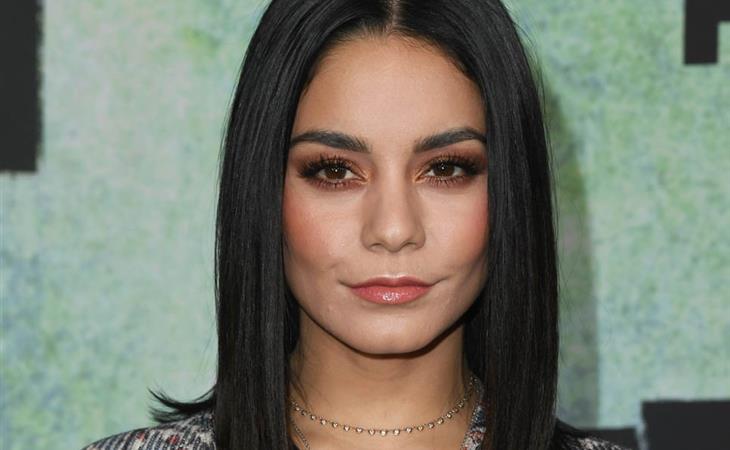