Here’s what happened last night that was so exciting...
So exciting I immediately texted all my friends who would have remembered the era. We are mostly all married now. Some are parents. So, you know, supposedly mature. There were many exclamation points and OMGs in the messages. If you were around, you know. There is no getting over it:

Not even for Jamie Lynn Spears!

It was Jamie Lynn’s birthday yesterday. She’s 22 now. Maybe she was feeling nostalgic? Maybe she was drunk? Maybe both? Whatever the reason, this is the photo she tweeted: 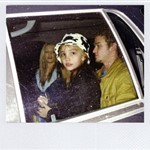 The photo was accompanied by this message - a direct tweet TO JUSTIN:

@jtimberlake Weird hearing ur music as an Adult ha..Not only do I appreciate it.I GET it #jay #crymeariver #mirror

I can never resist that song when it’s on the radio. By the time the Baby, Baby, Baby part comes on I am at full blast -- voice and air vents (come on, so as to simulate a wind machine, you’ve never done that before?) -- singing for the lost...

Well, naturally, Jamie Lynn deleted the tweet. Thanks God the internet doesn’t forget. She replaced that post however with this one: 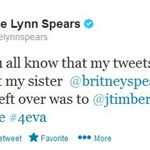 Which only makes it more intriguing.

You want to waste some more time? Video is below.

1.He was So.Much.Cuter when they were together
2.The way she’s holding on to his hand is breaking my heart
3.This was the outfit that inspired the Cry Me A River video, non?
4.Why can’t it be 2002 all over again?

The Royal Bond Girl is honoured